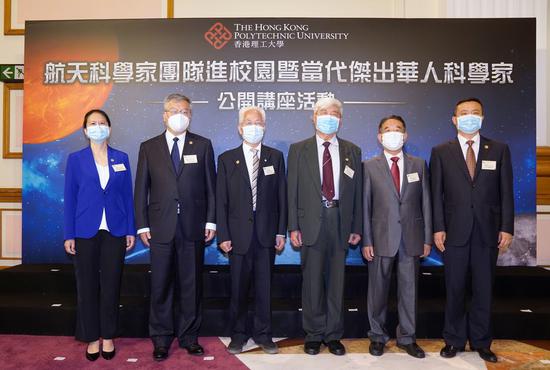 Mainland aerospace scientists started on Wednesday to give lectures and meet students on Hong Kong campuses.

On their agenda is also to witness the inauguration of a lunar soil exhibition slated for Saturday here. The lunar soil was brought back to Earth by the Chang'e-5 lunar probe last December.

Alfred Sit Wing-hang, secretary for innovation and technology of the Hong Kong Special Administrative Region (HKSAR) government, said Wednesday that the experts will share the national aerospace achievements with the Hong Kong audience and bring some lunar soil for public exhibition.

"I believe Hong Kong people, especially the younger generation, can have a better understanding of the space spirit and enhance their sense of pride and belonging to the country," he said.

In Wednesday's events, Hu Hao, the chief designer of the third stage of the national lunar exploration program, presented a national flag, which is the same as the one carried by the Chang'e-5 probe to the moon, to the HKU as a gift.

"The Chang'e-5 probe retrieved a total of 1,731 grams of lunar samples from the moon and the figure is meaningful," Hu said when delivering a speech.

Hu explained that the country spent 17 years from launching its moon exploration program to collecting lunar samples and succeeded on the first attempt of the three missions of orbiting, landing and sample-return.

Hu stressed the passion for innovation, a steady faith, perseverance, a sense of responsibility and meticulosity as the key to the success of national aerospace projects when elaborating on the space spirit.

When addressing PolyU students, Qi Faren, an academician with the Chinese Academy of Engineering (CAE) and former chief designer for Shenzhou spaceships, said he hopes young people will take the space spirit to heart and well understand the importance of self-reliance.

The lectures received rounds of thunderous applause by the audience.