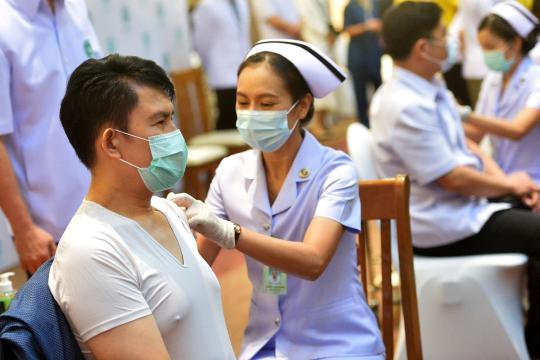 Vaccines from China are proving critical to Southeast Asian nations as they battle a new wave of COVID-19 infections, experts said, adding that the region can also benefit from China's experience in protecting public health security as well as the economy.

"Across Southeast Asia, (countries) are facing the resurgence (of COVID-19) with new variants," said Chheang Vannarith, president of Asian Vision Institute, a think tank in Phnom Penh, Cambodia. For many countries, the most effective solution is probably herd immunity, which requires vaccination of 70 or 80 percent of the entire population, he said.

With this threshold, vaccine cooperation with China comes in handy, especially given that supplies from Western nations and global pharmaceutical giants are not easy to come by.

"China has allocated a significant amount of vaccines to other countries; that shows a responsible leadership role of China," said Chheang, noting that action matters more than talk when it comes to promoting vaccine equity. "Southeast Asia is a unique neighbor so China has given a lot of attention to this region."

Cambodia reported 690 new cases on Monday, bringing the nation's total tally to 30,094, according to the country's health ministry.

The country has so far received over 6 million doses of vaccines, including 4 million shots of a vaccine from Sinovac Biotech and 1.7 million doses of China-donated vaccines from another Chinese firm, Sinopharm, local media Khmer Times reported.

China has donated vaccines to over 80 developing countries in urgent need and has exported vaccines to more than 40 countries, offering a total of 300 million doses to the world.

During the Global Health Summit on May 21, Chinese President Xi Jinping said Beijing "will provide still more vaccines to the best of its ability".

In Indonesia, the hardest-hit country in Southeast Asia, authorities on May 25 welcomed the arrival of 8 million bulk doses of COVID-19 vaccines from China. As of that day, the country had received 83.9 million doses of COVID-19 vaccines, both in bulk and ready-to-use form, from Sinovac and Sinopharm, as well as Anglo-Swedish company AstraZeneca, according to Xinhua News Agency.

"Indonesia also has transfer knowledge cooperation with China," noted Dicky Budiman, an epidemiologist at Griffith University in Australia, referring to a partnership between Indonesian state company Bio Farma and Sinovac.

In Thailand, as of May 20, China had delivered 6 million doses of COVID-19 vaccines, including 500,000 doses donated on May 17, the Chinese embassy in Thailand said on its Facebook page.

Some 3.6 million Thais have received vaccines, according to data released by the Thai government. Most of them received Sinovac's CoronaVac.

"Thailand now faces a serious third-round breakout of the pandemic and the public are eager to take the vaccine," said Tang Zhimin, director of China-ASEAN Studies at the Panyapiwat Institute of Management in Bangkok.

In the Philippines, a nationwide survey released by Social Weather Station on May 24 found that 39 percent of respondents said they prefer Sinovac's vaccine over those from other manufacturers, according to Xinhua.