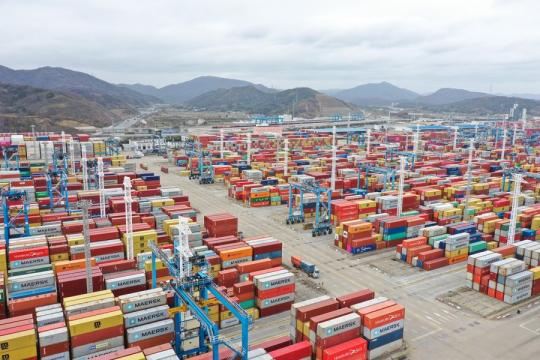 China's imports surged by the fastest pace in a decade last month as domestic demand gained more traction, but policy support is still needed in order to consolidate economic recovery and help hard-hit businesses, officials and experts said on Friday.

Underpinning the robust foreign trade growth was a global economic rebound that drove up overseas demand, as well as rising international commodity prices and recovering domestic demand that have combined to prop up the country's imports, officials and experts said.

Sheng Laiyun, deputy head of the National Bureau of Statistics, said the Chinese economy has maintained a strong momentum of recovery, with consumer demand picking up and leading indicators showing positive changes.

"Retail sales grew by 1.75 percent in March from February, indicating that consumption has continued to improve while the nation's vast consumer market has large potential and strong resilience," Sheng said.

The official purchasing managers index for the manufacturing sector, a leading economic indicator, stayed at a "relatively high level" of 51.1 last month and signaled the robust expansionary momentum of the economy, Sheng said in an interview with Economic Daily, published on Friday.

Recovering consumer spending and buoyed production have helped prop up China's imports, with a large amount of industrial and agricultural products imported from developed countries such as the United States, said Liang Ming, a researcher at the Chinese Academy of International Trade and Economic Cooperation in Beijing.

"Though China's exports of anti-pandemic materials have gradually declined since late last year, electromechanical and electronic products, such as mobile phones and laptops, enjoyed robust sales. Exports of these products have not declined as the world is recovering from the virus," Liang said.

Many Chinese companies have ridden the wave of rising overseas orders and increased output, experts said. William Li, CEO of Chinese electric vehicle manufacturer Nio Inc, for instance, said Nio vehicles will be available in five European countries by 2022, after it will start exporting vehicles to Norway in September.

"Commodity price rises gained momentum in the fourth quarter of last year, and the trend has accelerated this year as the growth in consumption outpaced supply," Chen said.

Sheng, the NBS official, said in the Economic Daily interview that many market entities, including smaller ones that have been hard hit by the impact of COVID-19, now face the pressure of rising prices of raw materials and long-lasting problems in getting finance.

"The economy has yet to become fully normalized," he said, as China's two-year average economic growth for the first quarter of the year stood at 5 percent and fell short of the estimated potential growth rate of around 5.8 percent, with the services sector, manufacturing investment and consumption lagging behind.

"We must secure assistance to hard-hit enterprises and maintain the continuity, consistency and sustainability of macro policies," Sheng said.

Sheng's remarks echoed the statement of the meeting of the Political Bureau of the Communist Party of China Central Committee, held on April 30. The statement said economic recovery remains unbalanced and the foundation is not solid, and pledged to avoid sharp U-turns in macro policies.

Matt Simpson, an analyst with Gain Capital, a US provider of online trading services, said the Chinese government is expected to "remain cautious in policy normalization" despite the elevated export growth, as the relative limited purchasing power of emerging markets might cloud China's future export growth.