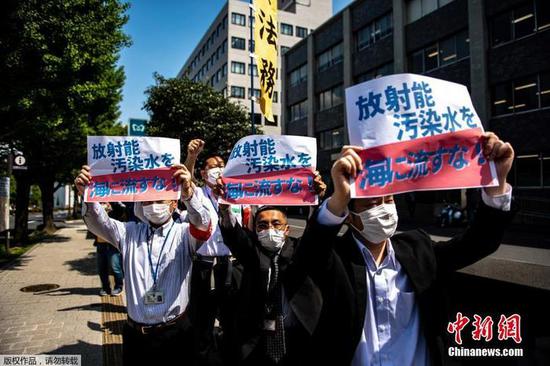 Over 78 percent of global netizens expressed opposition to Japan's decision to discharge contaminated radioactive wastewater into sea, according to an exclusive survey posted by Xinhua on its Twitter account on Tuesday.

A total of 1,121 Twitter users took part in the survey which was of a single-choice vote and lasted for 24 hours.

The respondents' concerns mainly focused on the wastewater's lasting harm to the marines and human beings, Japan's irresponsibility and Western countries' collective silence on the matter.

Sara Gomez Arancibia wrote with angry face emojis: "For me, (this) is a big mistake that goes against the respect of marine resources across our planet earth."

Ahsen Abro wrote: "Radiation water reached the coast of California years ago, increasing cancer cases there by a wide margin. What's this stunt show about?"

Edison Aardvark wrote: "We need more information on the effects. This affects the waters shared by many nations."

Magic Stone wrote: "So surprised and shocked that someone still support this unethical and irresponsible decision."

Another netizen called Bill said: "The Western and its media all keep in silence. Japan brought disaster to human beings during World War Two. Now, Japan again is dragging human beings into hell. Where are the U.S., Britain and their mainstream media? They choose deliberately to be blind."

Results showed that 95 percent of the respondents voiced objection to Japan's decision, among whom 87 percent were strongly against it. Only 1 percent supported it, while 4 percent had no comments.

The water, according to reports, has been treated using an advanced liquid processing system, or ALPS, to remove most contaminants. However, things like tritium, a radioactive byproduct of nuclear reactors, are hard to filter out.

The Fukushima nuclear plant has been struggling to store the contaminated water in huge tanks at the facility where more than 1.25 million tons of contaminated water are currently stored, and the plant is expected to reach capacity next year.

Japan had considered evaporating or storing underground the tritium-laced water from the plant as an alternative. However, the Japanese government decided to dilute the contaminated water and discharge it into the sea because it was more technically feasible and would save on costs.

Struck by a magnitude-9.0 earthquake and ensuing tsunami that hit Japan's northeast on March 11, 2011, the No. 1-3 reactors at the Fukushima Daiichi nuclear plant suffered core meltdowns.

The plant has been generating massive amount of radiation-tainted water since the accident happened as it needs water to cool the reactors. The plant's operator Tokyo Electric Power Company Holdings Inc. said it will take around two years for the release to start.

Japan's decision has raised concerns from neighboring countries, including China, South Korea and Russia, about a possible impact on human health and fishery businesses. It has also faced strong opposition from environmental groups like Greenpeace.