Xinjiang teacher chose to go 'where country needs me most' 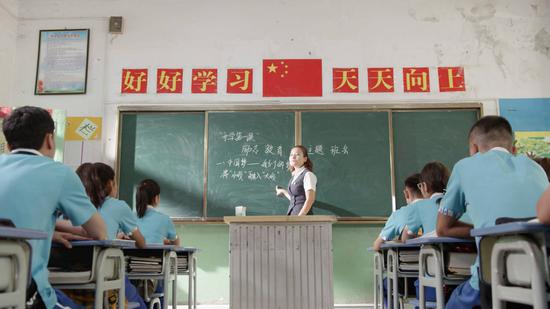 For Guljahan Amat, applying for membership in the Communist Party of China was a must-do.

Her parents in Urumqi, the capital of Northwest China's Xinjiang Uygur autonomous region, were officials on the State payroll. They wanted her to be politically motivated ever since she was in the first grade.

As a result, she became a member of the Chinese Young Pioneers, which is a national organization for primary school students, and the Communist Youth League, a movement for Chinese between the ages of 14 and 28 that is run by the CPC.

"They are my role models, being honest and righteous. I thought I should be a member of the CPC (as well)," said Amat, who is now 30 and a teacher in Xinjiang.

When Amat, who is of the Uygur ethnic group, passed the college entrance examination－the first among high school graduates of ethnic minority groups in Xinjiang－in 2009, she was recruited by the Education Department of Beijing University of Posts and Telecommunications to take preparatory courses on ancient Chinese language and English. The program is designed for high school graduates of ethnic minority groups who take college entrance examinations in their own languages.

"I spoke very poor Mandarin and had no knowledge of English at that time," Amat recalled.

In June 2011, her membership in the CPC was approved. In September of that year she was enrolled by Beijing Normal University's School of History with tuition waived and a small amount of allowance offered.

Chen Tao, head teacher of the 2011 history class, recalled that Amat did not apply for grant aid, even though her family's financial situation was not good, but hoped instead that classmates who were in a worse situation could get financial support. To deal with her own situation, she took part-time jobs on the campus.

Amat was always proud of outperforming her peers in Urumqi, from primary to high school. But among outstanding students from all over the country at Beijing Normal University, Amat felt a sense of defeat for the first time, because of her poor knowledge of ancient Chinese history and her poor teaching skills.

Because students at the school are trained to be teachers, they are required to lecture in front of their classmates.

"One day when it was my turn to lecture at the podium, I was so nervous that I drew a blank and faltered," Amat recalled. "My teacher called my performance 'too poor'."

"All of a sudden, I became unsure of my ability to be a teacher, which I have considered to be a dream job since I was a child."

But Amat didn't call it quits. She started reading aloud ancient Chinese characters for half an hour every morning and spent almost every weekend at the National Library of China in Beijing to read and borrow books.

In addition, she asked the class's teaching assistant to help her improve her lecturing skills.

By the time she finished her third year of university, she was one of the best lecturers.

"I was not the smartest and the best one, but I didn't allow myself to be outdone by my classmates in terms of hard work and persistence," Amat said. "I have always kept going if I aim for a goal."

During the summer holiday in 2014, she was thrilled to be one of four people to report to President Xi Jinping, who is also general secretary of the CPC Central Committee, when he visited the university. She represented all the students; the three others were the university's Party secretary, the president of the Chemistry School and the assistant for political and ideological work from the Education Department.

The meeting with Xi, as well as his remarks, turned out to be the inspiration for Amat as a teacher.

"General Secretary Xi told us that teachers should be benevolent," she said. "Now that I'm a teacher, I have always tried my best to help my students with my soul and heart," she said. "The children know well whether you treat them sincerely."

Amat's choices of schools where she has taught and is now teaching were also inspired by Xi, who said that when the central and western parts of China grow strong, the country will become strong as a whole.

After graduating in 2015, Amat decided to return to Urumqi, even though she could have chosen to remain outside Xinjiang.

Amat said, "I was wondering, if all the students from Xinjiang left for other parts of the country, who would build our home place? General Secretary Xi says the central and western areas are short of skilled people. And I don't want to see my native land left behind."

No 23 Middle School in Urumqi was the first place to recruit Amat to be a history teacher. But a one-year chance to be a volunteer teacher at No 8 Middle School in Kargilik (Yecheng in Mandarin) county in southern Xinjiang's Kashgar prefecture was a life-changing experience for her. She applied to work at the school, which is 1,500 kilometers away from Urumqi and a melting pot for about 500,000 people of 13 ethnic groups, of which Uygurs account for 93 percent.

"Kargilik is not that attractive in terms of some factors such as education level, living conditions and medical facilities, but I made up my mind to stay," Amat said. "I want to play a role in the place where the country needs me the most."

Amat was moved by how her students need her and how they aspire to change. "The children are genuine, rustic, loving and easily approachable," she said.

On her 25th birthday, when she went on a business trip to Urumqi, her students looked for her, from her office to her home. When they failed to find her, they cried, thinking she wouldn't come back.

And when she was in bed with a terrible cold recently, two girls made porridge for her.

"Almost every day, students let me know that what I am doing is worthwhile and meaningful," Amat said.

Dai Yan, the head of the middle school's Party committee, said: "I've seen some people trying their best to go to big cities. Amat is an exception who moved the other way, from Urumqi to this faraway place."