Hate stares at Asians from screens 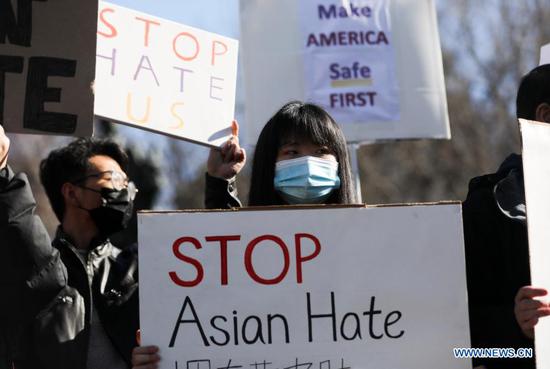 People take part in a protest against Asian hate in New York, the United States, on March 21, 2021. Eight people, six Asians and two Whites, were killed in shooting incidents in the Atlanta area by a suspect this week. The attacks came amid a troubling spike in violence against the Asian American community during the coronavirus pandemic. (Xinhua/Wang Ying)

Adding to dangers on streets, they also suffer rise in online abuse, US poll finds

Asian Americans have suffered the biggest spike in serious incidents of online hate and harassment compared with other groups in the United States, an annual survey released on Wednesday shows.

About 17 percent of Asian Americans surveyed by the Anti-Defamation League said that they experienced severe online harassment compared with the 11 percent reported last year, It was the largest uptick in comparison to other groups, according to the ADL, which monitors the activities of domestic and international hate groups.

The survey of 2,251 people conducted by YouGov, a public opinion and data analytics firm, shows that racist incidents against the Asian community aren't just happening offline.

"The spike in physical violence against Asian Americans across the nation was whipped up in large part by bigotry and conspiracy theories that grew online, fanned by national leaders, including former president (Donald) Trump's incendiary rhetoric blaming China for the pandemic and referring to the virus as the 'China plague' or 'kung flu'," researchers said.

A study published on March 17 by researchers at the University of California in San Francisco tracked nearly 700,000 tweets that used either the neutral hashtag "#covid19" or"#chinesevirus" from March 9 to March 23, 2020.

The World Health Organization warned in 2015 that naming diseases after specific areas or ethnic groups can perpetuate xenophobia around the globe.

The WHO, as well as the US Centers for Disease Control and Prevention, issued guidelines for this usage, warning against linking the disease to a specific place or area. Asian-American communities have warned for several months that political leaders' linking COVID-19 to China could lead to violence.

ADL chief executive Jonathan Greenblatt said the findings, which come amid a growing outcry over the rise in attacks on Asian Americans and Pacific Islanders nationwide, show that efforts to curb surging anti-Asian sentiment by social media platforms like Facebook, Twitter and YouTube have fallen short.

The report was issued the day before the CEOs of Facebook, Google and Twitter were expected to appear virtually before the House of Representatives' Energy and Commerce Committee to address how false information around the pandemic and the election spreads online and to discuss their handling of misinformation, disinformation and other harmful content.