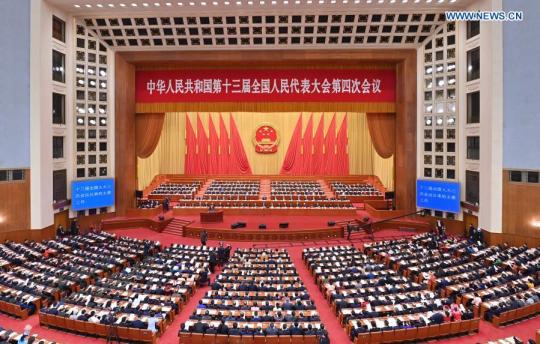 The second plenary meeting of the fourth session of the 13th National People's Congress (NPC) is held at the Great Hall of the People in Beijing, capital of China, March 8, 2021. (Xinhua/Yue Yuewei)

Li Zhanshu, chairman of the NPC Standing Committee, delivered the work report of the committee to the meeting.

In the past year, the NPC Standing Committee has effectively performed the duties and functions as the state organ of power, offering legal guarantee for advancing the implementation of major work plans, tackling major risks and challenges and safeguarding national security, Li said in the report.

The NPC Standing Committee has strengthened the implementation of the Constitution, stepped up legislation in key areas and conducted oversight of legal compliance and work performance in accordance with the law, according to Li.

The main tasks for the coming year include working to ensure greater observance of the Constitution and enhance constitutionality reviews and strengthening legislative work in key areas, emerging areas and areas relating to external affairs, he said.

For 2021 and beyond, Zhou vowed to strengthen impartial administration of justice, deepen reform, and fully leverage the courts' trial function.

Procurator-General Zhang Jun delivered the SPP work report. Prosecutors across the country handled over 3 million cases over the past year, down 19.4 percent from last year, according to the report.

In 2021, prosecutors should work to provide strong legal guarantee for a good start in the drive to fully build a modern socialist country, Zhang said.