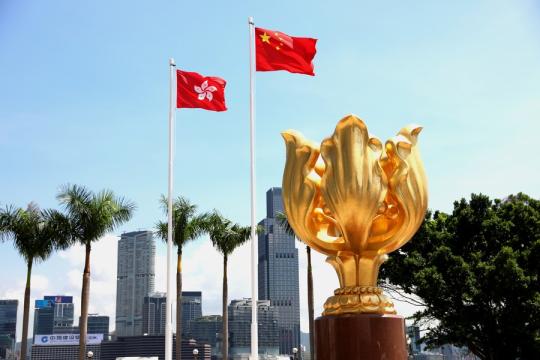 Hong Kong's representatives at this year's two sessions set out to propose a number of ideas and suggestions to improve the special administrative region's electoral system in line with the principle of "patriots governing Hong Kong".

Among the suggestions, many called for the SAR's electoral reform.

On Wednesday, Leung Chun-ying, vice-chairman of the National Committee of the Chinese People's Political Consultative Conference, China's top political advisory body, posted on social media about what he termed the illogicality of having a large number of district councilors on the city's Election Committee, which is responsible for choosing the city's leader.

Leung, a former Hong Kong chief executive, said district councilors are elected to serve the interests of the public in their districts.

But the district councilors' role was distorted by some radicals during the region's social unrest in 2019, Leung said.

The district councils were turned into a platform for politics, instead of providing consultation for the government on district administration and issues involving people's livelihoods as intended, Leung said. The distortion was not in line with their duties as stipulated in Article 97 of the Basic Law, he said.

The SAR government also has proposed amending the law to require district councilors to swear allegiance to the SAR and uphold the Basic Law. Those who violate the oaths would face disqualification and a five-year ban from running for public office, according to the amendment.

Tam Yiu-chung, a member of the Standing Committee of the National People's Congress, said Hong Kong should draw lessons from the past to avoid the return of those trying to stir up trouble in the city.

Tam told the Southern Metropolis Daily newspaper in Guangzhou, Guangdong province, that separatists had taken advantage of the system's defects and infiltrated government bodies, attempting to take control and replace patriots in governing the city.

With the joint efforts of the central and SAR governments, separatist forces have been effectively subdued after the enactment of the National Security Law for Hong Kong, he said.

Rita Fan Hsu Lai-tai, former head of the city's legislature and a former member of the NPC Standing Committee, suggested replacing the seats held by district councilors in the city's Election Committee by Hong Kong deputies to the NPC and the city's members on the National Committee of the CPPCC.

Fan said district councilors' representation on the Election Committee is not necessary, according to the legislative intent of the Basic Law, and canceling the seats they hold will not affect their advisory roles to the government.

According to the current regulations, district councilors take up 117 seats in the 1,200-strong Election Committee, while CPPCC National Committee members have only 51 seats on the committee.

Both the enactment of the National Security Law for Hong Kong and proposals to modify Hong Kong's electoral system are meant to improve "one country, two systems" and ensure a sustained and steady implementation of the framework, he said.

Other proposals from Hong Kong delegates include enhancing national education and youth exchanges.