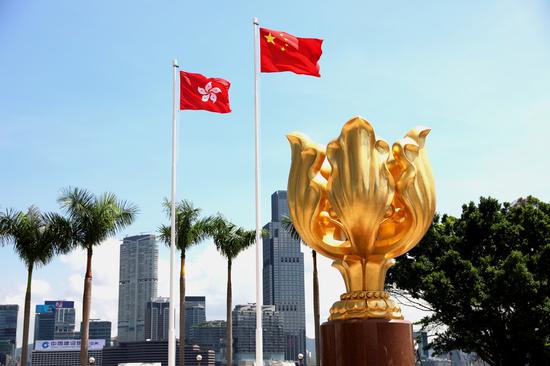 DC members should comply with the same oath-taking requirements of swearing to uphold the HKSAR Basic Law and bear allegiance to the HKSAR as other public officers, according to the Public Offices (Candidacy and Taking Up Offices) (Miscellaneous Amendments) Bill 2021.

Previously, the HKSAR chief executive, principal officials of the government, members of the Executive Council and of the Legislative Council, judges of the courts at all levels and other members of the judiciary are required to take oaths, which are written into Article 104 of the Basic Law.

The Standing Committee of the National People's Congress (NPC) endorsed the interpretation of Article 104 of the Basic Law on Nov. 7, 2016, which explains that oath-taking is the legal prerequisite and required procedure for public officers specified in Article 104 of the Basic Law to assume office and must comply with the legal requirements in respect of its form and content.

The interpretation also makes it clear that an oath-taker who makes a false oath or breaches the oath, shall bear legal responsibility.

Article 6 of the national security law in the HKSAR also stipulates that a resident of the HKSAR who stands for election or assumes public office shall confirm in writing or take an oath to uphold the Basic Law and swear allegiance to the HKSAR.

The amendments also specify the legal requirements and conditions of "upholding the Basic Law and bearing allegiance to the HKSAR," make clear concrete oath-taking requirements in the Oaths and Declarations Ordinance, enhance the arrangement of the oath administrator, amend the Legislative Council (LegCo) Ordinance and the District Councils Ordinance, and introduce restriction in chief executive, LegCo and DC elections.

This legislative exercise seeks to implement Article 104 of the Basic Law, the interpretation by the NPC Standing Committee, and other oath-requirements for public officers accurately, so as to fulfill the constitutional obligation of the HKSAR, a government spokesman said.

"We believe that the bill is significant in upholding the constitutional order of the HKSAR, ensuring 'patriots governing Hong Kong', and is conducive to the progress of the 'one country, two systems' principle," he said.

The bill will be introduced into the LegCo for first reading and second reading on March 17 and the HKSAR government will fully complement the work of LegCo in scrutinizing the bill to strive for its early passage, the spokesman said. Enditem