Trump claims he is 'immune' from coronavirus 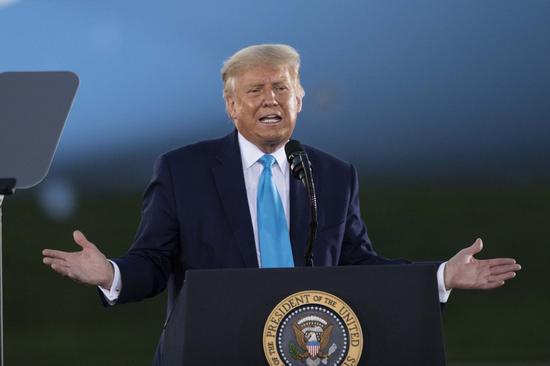 U.S. President Donald Trump claimed on Sunday that he is now "immune" from the coronavirus, though medical research has suggested it is possible to be reinfected with the virus.

"It seems like I'm immune, so I can go way out of a basement," Trump said in an interview on Fox News.

"It looks like I'm immune for, I don't know, maybe a long time, maybe a short time. It could be a lifetime. Nobody really knows," Trump added.

White House physician Sean Conley said on Saturday that the president, who tested positive for COVID-19 on Oct. 1 and was later hospitalized for three days before returning to the White House with continued treatment, is "no longer considered a transmission risk to others."

However, Conley did not disclose when Trump last had a negative test result.

A study published in September in the journal Nature Medicine, however, indicated that recovery from the coronavirus does not confer lifetime immunity.

Before and after Trump's infection, a number of White House staff members have also tested positive for the virus.