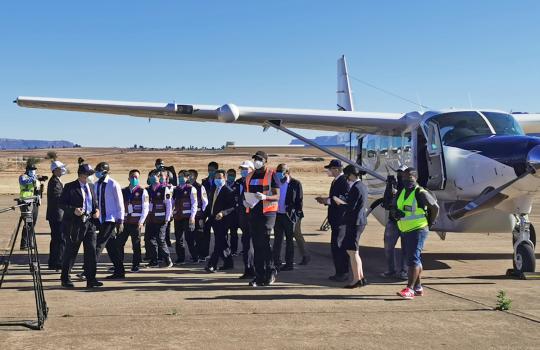 A team of Chinese medical experts arrives in Lesotho's capital Maseru on Sunday afternoon to begin sharing their expertise on fighting COVID-19. [Photo/Xinhua]

China and Africa have been deepening their cooperation in the midst of the health and economic challenges posed by the coronavirus pandemic.

Countries across Africa are drawing on the already strong ties with China to help them overcome the broad-based impact of the pandemic, as well as recover from natural disasters.

Ma Xinmin, China's ambassador to Sudan, announced on Monday that China will offer emergency humanitarian aid worth $300,000 to the East African country as it struggles to cope with the widespread damage caused by floods and torrential rains.

At a virtual reception held at the Chinese embassy in Khartoum to celebrate the 71st anniversary of the founding of the People's Republic of China, Ma said that China is ready to further strengthen exchanges and cooperation with Sudan on public health and continue to offer as much help as it can. Ma also said China hopes Sudan will soon prevail over its current challenges.

"We believe that the Sudanese government and people will definitely be able to overcome the floods and rebuild their homes as soon as possible," Ma said.

Sheikh Khidir, a senior adviser to the Sudanese prime minister, said that Sudan always appreciates the support given by China. Khidir highlighted the valuable Chinese assistance to combat the coronavirus pandemic and the cash support to help the country cope with the damage from the floods.

In neighboring Kenya, Wilfred Marube, the chief executive of the Kenya Export Promotion and Branding Agency, said on Monday that access to the Chinese market had been granted for Kenyan frozen avocados. Suppliers of other farm-based products are also expected to gain such access soon, Marube said.

The export official said China offers the greatest potential among the country's trading partners due to its huge population and large purchasing power.

"We will soon roll out an export market program for China. We are an agricultural-based economy and so most of our exports will initially be farm-based products such as coffee, tea, and horticulture produce," Marube said.

Kenya is Africa's biggest supplier of avocados and the seventh largest in the world, according to data from the Food and Agriculture Organization of the United Nations.

Farther south, China-Africa cooperation was on display as a Chinese medical team arrived in Zimbabwe to help doctors handle the coronavirus pandemic in the country. According to local media, the 10-member team, the 18th of its kind to visit Zimbabwe, will assist the Zimbabwean doctors in fighting the virus for a year.

On welcoming the team at the Robert Mugabe International Airport, Maxwell Hove, the director of curative services in Zimbabwe's ministry of health, thanked the current team of Chinese medical personnel who will be leaving on Friday.

Luo Weiqiang, the head of the new Chinese medical team, said China wants to assist Zimbabwe in the fight against COVID-19 as well as explore other areas, such as in the field of traditional medicine.

Luo is also the deputy chief physician in the radiology department of Zhuzhou Central Hospital in Hunan province.

The Chinese doctors will share their experience in epidemic control and prevention with their counterparts in Zimbabwe and provide them with prevention and treatment training. They will also provide guidance and assistance to other Chinese medical teams in Africa via video conferences.