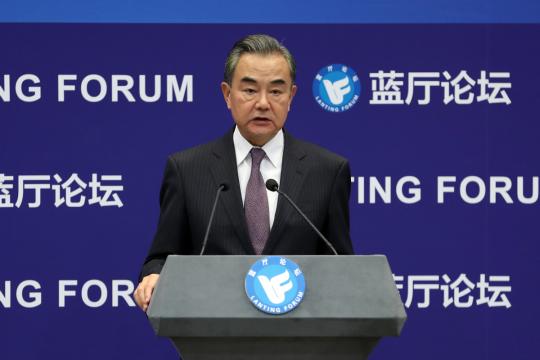 State Councilor and Minister of Foreign Affairs Wang Yi speaks at the opening ceremony of the Lanting Forum on International Order and Global Governance in the Post-COVID-19 Era in Beijing on Sept 28, 2020. (Photo provided to chinadaily.com.cn)

All peoples 'entitled to a good life', Wang says at forum on governance

Any attempt to resurrect hegemonism and turn the world back into a jungle is "doomed to fail", State Councilor and Foreign Minister Wang Yi said.

"Those who think that they could flout and breach international rules simply because they have more muscles will eventually end up in the dustbin of history," Wang said when addressing a forum attended by veteran politicians, diplomats and experts on Monday in Beijing.

At the forum, using the theme "International order and global governance in the post-COVID-19 era", Wang called on all countries to jointly defend the universal values of fairness and justice.

"All countries, big or small, strong or weak, are equal members of the international community. All peoples, wherever they are, are entitled to a good life," Wang said.

He said China is committed to the rule of law as it has joined almost all universal intergovernmental organizations and international conventions, and has signed more than 25,000 bilateral treaties.

"China will stay firmly on the path of peaceful development, and work with other countries to oppose the narrow-minded approach that puts one country's interests first and (employs) the dangerous practice of a zero-sum game," he said.

Addressing global efforts to ensure solidarity amid the pandemic, Wang warned that a few countries "are creating divisions", and "they are pushing the world into the abyss of ideological confrontation and clash of civilizations".

"Spreading the political virus of hatred and confrontation is as much a threat to the world as the coronavirus to mankind," Wang added.

Also, Wang said that while countries have benefited from economic globalization and the application of information technologies, they also face the challenges of uneven and inadequate development and the need to adapt governance to new realities.

"To meet these challenges by resorting to protectionism and decoupling leads only to self-imposed isolation," Wang warned.

Yasuo Fukuda, a former Japanese prime minister attending the forum through a video link, described a widespread concern that the United States in recent years "has been drifting away" from its original aspirations in areas such as environmental issues, the United Nations, free trade and domestic democracy.

Ban Ki-moon, former secretary-general of the United Nations, told those attending the event that "growing skepticism over globalization and the role of international organizations" has hindered a unified response to COVID-19 and climate change.

Some advanced countries are "putting their own interests over shared interests", giving rise to unilateralism, he warned.

Wang said China will vigorously engage in international cooperation against COVID-19 and will work with all countries to contain and ultimately defeat the virus as soon as possible.