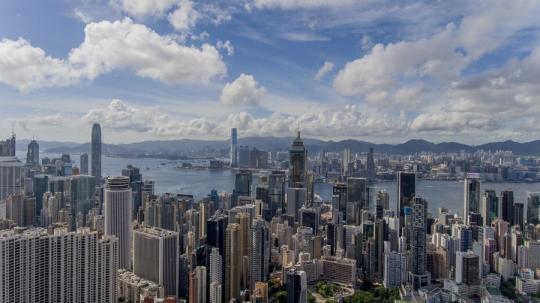 The central government's liaison office in Hong Kong warned on Tuesday against reported plans for unlawful activities on National Day, stressing zero tolerance for what it called reckless acts now that the National Security Law is in force.

The statement was issued after some social groups were reported to have instigated the public to take part in unlawful processions during the holiday and create trouble across the city.

A statement from the office called it "horrifying" that some radical activists were plotting to storm police stations on National Day and instigate others to buy firearms and bows and arrows to attack police.

Last week, police said they discovered online claims that protesters will cause rampant destruction to the city on National Day. Also, two people were being investigated for allegedly selling firearms online.

Publicly inciting subversion and attacking law-enforcement agencies and police officers are prohibited by the National Security Law and local laws and are brazen provocations, the statement said.

The office's statement also said that following an investigation, mainland police have collected enough evidence to proceed in a case involving 12 Hong Kong residents detained on the mainland. Police were applying for judicial approval to make arrests.

The 12 local activists, who had all been arrested in relation to last year's social unrest, were detained on Aug 23 by Guangdong-based China Coast Guard officials as they were trying to leave for Taiwan to seek political asylum. They were detained on suspicion of illegally crossing the border.

It has been reported that some Hong Kong people have claimed they were treated unfairly on the mainland and demanded mainland authorities transfer them back to Hong Kong for trial. The statement said the people who have spread such rumors are pushing residents to break the law.

"They are the ones who have been harming Hong Kong behind the scenes," the statement said.

The office said that after implementation of the National Security Law in the SAR, order has been gradually restored in Hong Kong.

It is hoped the public will be able to see through the plot by a handful of people to create problems in Hong Kong, the statement said. It called on people to jointly safeguard the prosperity and stability of the SAR.