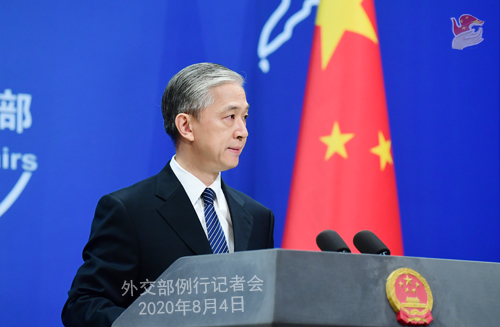 China urged the United States on Thursday to immediately stop all forms of official exchanges with Taiwan ahead of the arrival on the island of U.S. Undersecretary of State for Economic Growth, Energy and the Environment Keith Krach, saying it will take necessary measures as the situation develops.

Krach arrived in Taiwan late Thursday afternoon for a memorial service on Saturday for former Taiwan leader Lee Teng-hui. He was expected to meet Taiwan leader Tsai Ing-wen on Friday. He also was to attend an economic and commercial dialogue with Taiwan authorities, local media reported.

His visit follows a trip last month by U.S. Secretary of Health and Human Services Alex Azar, the highest-level U.S. official to travel to the island in four decades.

Foreign Ministry spokesman Wang Wenbin said China firmly opposes any official exchange between the U.S. and Taiwan, which is a consistent and clear policy.

"We urge the U.S. to fully recognize the extreme sensitivity of the Taiwan question," he said, adding that the U.S. should stop expanding relations with the island in any substantive way.

He demanded the U.S. abide by the one-China principle as well as the three Sino-U.S. joint communiques and properly handle Taiwan-related issues.

Speaking of Krach's trip, Ma Xiaoguang, a spokesman for the Taiwan Affairs Office of the State Council, said on Wednesday that the Taiwan question is China's internal affair, and no external forces are allowed to interfere.

"We firmly oppose any form of official exchanges between Taiwan and countries that have established diplomatic relations with China. This kind of behavior interferes with China's internal affairs, hurts the feelings of the Chinese people and violates the norms of international relations," he said.