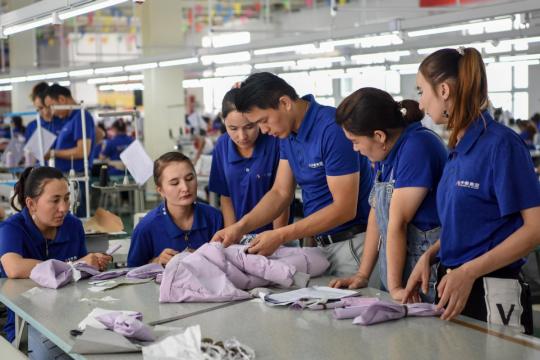 A technician checks the quality of products at a garment company in Hotan, Xinjiang Uygur autonomous region, on Aug 25. (Photo/Xinhua)

People's right to choose their own jobs is fully respected in the Xinjiang Uygur autonomous region, and forced labor is strictly prohibited, according to a white paper published on Thursday by the State Council Information Office.

Job security has particular significance in ensuring people's right to work, improving their living standards, and promoting social harmony and stability in Xinjiang, the document said.

Terrorists, separatists and religious extremists in Xinjiang have long incited the public to resist learning Mandarin, reject modern science, and refuse to improve their vocational skills, economic conditions, and their ability to better their own lives, said the white paper, titled "Employment and Labor Rights in Xinjiang".

As a result, some local people, especially in southern Xinjiang, have outdated ideas－they suffer from poor education and employability, low employment rates and incomes, and have fallen into long-term poverty, it said.

Workers' job preferences have always served as an important reference for the regional government of Xinjiang in designing its employment policies, expanding employment channels, creating jobs and organizing vocational training sessions. The goal is to ensure that people can make their own choices about work.

Furthermore, Xinjiang has taken resolute measures to prevent or punish any incidents of forced labor.

Ayinur Akmu, 40, said she was happy to find a job so close to her home at a factory making headset parts in the village of Langan.

"It only takes 15 minutes to go from my village to the factory by bus and the pay is good. So I sent my job application as soon as I saw the recruitment advertisement on the notice board of the village committee last year," Ayinur said.

Before the factory was set up near her village, she had to travel to Artux, capital of the Kezilesu Kirgiz autonomous prefecture in southern Xinjiang, to work as a waitress to earn extra income so she could support both of her children.

"Now I can also run a barbecue restaurant in my village with my husband after work to make more money. With the stable income from the factory, I am more confident than ever that I can give my children a better life," she said.

Ark Kadeer, 31, is now a supervisor at the nangindustrial park in Jiashi county in southern Xinjiang's Kashgar prefecture. Nang, a baked flatbread, is a staple foodstuff for the Uygur ethnic group, and has now become an important part of the diet of people from all ethnic groups in Xinjiang.

Before joining the industrial park in October 2019, Ark was only the nangmaster baker in his village and had four apprentices. Now he is thenangmaster baker of more than 1,200 nangbakers who produce an average of 300,000nanga day.

"My income wasn't stable when I ran thenangshop in my village. I could make 2,000 yuan ($296) a month at most by selling nangto the villagers. Now I can earn at least 3,800 yuan a month. The industrial park has a dedicated e-commerce team that distribute nangall over China. All I need to do is to pass on my skills and concentrate on inventing new varieties to let more people love our staple food," Ark said.

Xinjiang has achieved remarkable results in providing employment services and job security to its residents in recent years. From 2014 to 2019, the number of people employed in Xinjiang rose from 11.35 million to 13.3 million, the white paper said.