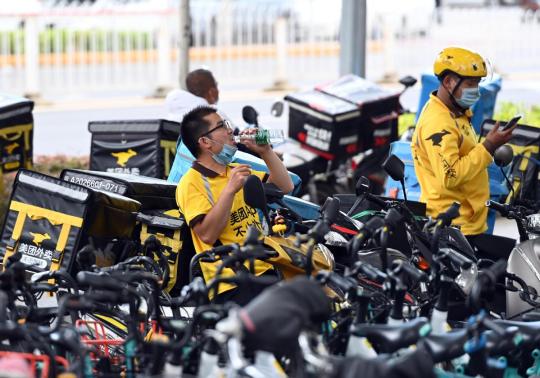 As a milk tea lover, 19-year-old Tang Chenxiao likes to order a cup online via delivery platforms every day. But delivery costs have become a disincentive.

Recently, she was surprised to find that Meituan, China's largest on-demand service platform for online deliveries, is testing a new group-buying function in her community located in Wuhu, Anhui province.

With the new service, Tang is able to invite others to buy food and snacks in the same store through a WeChat sharing link. When one or more of her friends joins in, the order is processed with no packaging or delivery fees.

Industry insiders pointed out that Meituan's newly added group-buying feature is aiming for a bigger slice of the market from a group-buying market dominated by Pinduoduo, and is also expected to attract a large number of users from lower-tier cities to rival another food delivery leader, Ele.me.

The move also reflects a broader trend in which internet companies jump on the bandwagon of group-buying in search of a new growth engine, especially since the COVID-19 outbreak, to tap new consumption potential from price-sensitive consumers.

Group-buying allows a team of consumers to buy goods or services together online at comparatively lower prices.

"The online group-buying business has fully met the untapped potential of price-sensitive consumers, which totally transformed and innovated the traditional consumption model," said Jing Linbo, head of the Evaluation Studies of the Chinese Academy of Social Sciences, a think tank.

"The traditional small-batch/large-scale production model, which was centered on manufacturers, is becoming more consumer-centric. This personalized customization mode is expected to stimulate the vitality of social productivity and improve business efficiency," Jing said.

Jing pointed out that for consumers, "price" is the first and most important factor prompting them to buy things together with friends or strangers online. It is also the driving factor that attracts them to consume more.

According to a media report, the platform has already launched its pilot service in Jinan, Shandong province, and is also expanding its local team.

Market consultancy AskCI Consulting Co Ltd said more than 500 million Chinese consumers were using online group-buying platforms as of the end of June, almost double the figure from two years ago. Another report by QuestMobile showed that some 60 percent of community group-buying customers are from lower-tier cities. 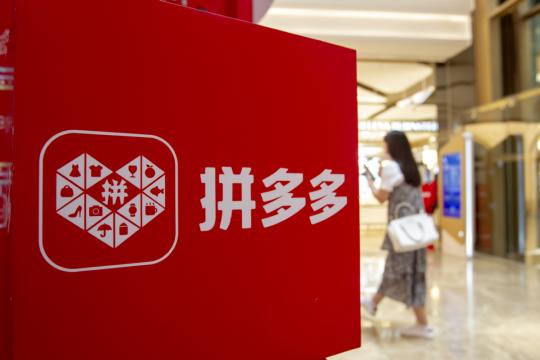 A consumer walks past an advertisement of e-commerce platform Pinduoduo at a shopping mall in Shanghai. Photo provided to CHINA DAILY

The trend is also being driven by COVID-19, which forced consumers who are not used to shopping online to get used to the practice to maintain social distancing, the report said.

"The outbreak has shifted people's consumption habits from offline to online in a range of sectors, including shopping, entertainment and education. Like the rapid rise of online shopping after the outbreak of severe acute respiratory syndrome in 2003, many online sectors will see new opportunities," said Liu Mingdi, head of China strategy at UBS Investment Research.

As consumers increasingly embrace online shopping and get to know about online group-buying, such products are no longer solely low-priced goods but now include higher-value products including electronic devices.

On Aug 6, Pinduoduo launched its online shopping gala with many intelligent home appliances and electronics on sale. A Nintendo Switch gaming console, for example, is priced at 2,359 yuan on Pinduoduo while the price on e-commerce sites like JD and Taobao is 3,089 yuan, representing a 30 percent discount.

Jiang Xiaoyun, a 38-year-old internet worker from Beijing, recently bought a Nintendo Switch on Pinduoduo, which he believed was a quite good deal. A year ago, Jiang bought only various inexpensive items like USB cables from Pinduoduo.

Finding that the items he bought from Pinduoduo were no different from other e-commerce platforms and the quality was the same, he started to buy higher-priced electronics online. "They are of the same quality and much cheaper, so why not?" he said.

Zhen Zhiyong, chairman of IDG Capital, said during a conference that more and more consumers, especially housewives and the younger generation, have become major online purchasers during COVID-19, and this new trend makes community-based retail platforms a force to be reckoned with.

"The community model ends up being cheaper not only for buyers but also for the platforms. Since all members of one buying group live within the same community, platforms can replace individual deliveries with daily bulk deliveries to service a community," said Deborah Weinswig, CEO and founder of Coresight Research.

"As the community group-buying model centers on bulk delivery, the aim is to get people who live close to one another to order together. This results in increased efficiency and lowered costs for the platforms, allowing them to order in bulk instead of dispatching legions of delivery people on electric scooters," Weinswig said.

Pinduoduo has recorded sales growth in handled parcels of 60 percent year-on-year since mid-March. The number of parcels handled via the platform surpassed 1.5 billion in March, which made up for roughly a quarter of all delivery parcels generated nationwide.

Chinese community-based online retailing platform Nice Tuan said in late July that it has raised $80 million in a fundraising round. Led by CDH Investments, the latest round also includes GGV Capital, which led an $81.4 million investment in Nice Tuan earlier this year.

"We expect to build 3 million self-pickup stations for group-buying over the next three years, which will allow both urban and rural users in the country to get fresh food within an easy walking distance of three to five minutes," the company said.