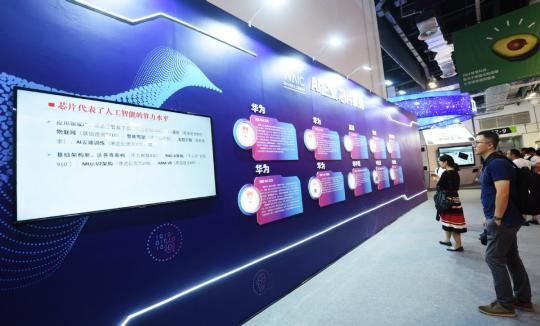 Visitors look at descriptions of AI chips developed by Huawei and Qualcomm during an AI conference in Shanghai. [Photo by Long Wei/For China Daily]

Qualcomm Inc's lobbying efforts to get US government approval to sell chips for Huawei's 5G phones show that no company is willing to sacrifice a huge market for political reasons and achieving win-win outcomes is the best solution, industry experts said on Tuesday.

"Qualcomm's move clearly indicates that imposing restrictions on a slew of Chinese tech companies, including Huawei Technologies Co, will bring no benefits for US counterparts, except for sharp revenue losses," said Wang Peng, an associate professor at the Hillhouse Academy of the Renmin University of China.

"Businesses across the world will not sacrifice cooperation and winwin results for the sake of biased political reasons," he said.

The comments came after The Wall Street Journal reported that Qualcomm is lobbying the US government to revoke restrictions on sale of components. The US restrictions have virtually handed Qualcomm's foreign competitors a market that is worth as much as $8 billion annually, they said.

"If Qualcomm is subject to export licensing, but its foreign competitors are not, the US government policy will cause a rapid shift in the 5G chipset market share in China and beyond," the US company said.

Industry experts said that the so-called foreign competitors are MediaTek and South Korea's Samsung. Under the US restrictions, Huawei is reported to have signed a letter of intent for sourcing 120 million chipsets from MediaTek, which according to some industry insiders, will help MediaTek surpass Qualcomm in chipset sales in terms of market share.

Daniel Jiang Han, senior researcher from market consultancy Pangoal, said that it is not easy for many key electronic component manufacturers to leave the Chinese market, as it is one of the largest manufacturing powerhouses in the world with a complete industry chain.

"For Qualcomm, it makes good business sense to continue shipments to Huawei, as it already has a long-term licensing agreement with Huawei," he said.

In July, Qualcomm said it has settled a patent dispute with Huawei, under which the latter will pay it $1.8 billion in back royalties owed for 2019 and for the first six months of this year under a new global patent license agreement.

The US government put Huawei in an "Entity List" in May 2019 and said US firms are required to obtain a license before exporting domestically produced chips and software. In May this year, Washington expanded these rules by requiring contract chip producers anywhere in the world that use US semiconductor equipment and technology to obtain its approval before producing chips designed by Huawei's subsidiary HiSilicon.

Speaking at a conference earlier this month, Richard Yu, president of Huawei's consumer unit, termed the halt on production of Huawei-designed Kirin premium chips as a very big loss and said 2020 may be the last year for the Kirin high-end chips due to US sanctions.

Canalys said Huawei is still subject to US government restrictions, which have affected its business outside of the Chinese mainland. Its overseas shipments fell by 27 percent from April to June this year.

However, the company continued to dominate the domestic market and boosted its Chinese shipments by 8 percent in the second quarter. Huawei currently sells over 70 percent of its smartphones in the Chinese mainland.

"There is a huge gap between Chinese chipset and other key electronics manufacturers and world-leading companies in terms of technologies. But it does not mean that the country cannot move into the fast lane," said Wang from the Renmin University of China.

"With more orders moving to local companies, Chinese firms in the field will gather more attention and investment, which they will further leverage for the research and development of core technologies," he said.