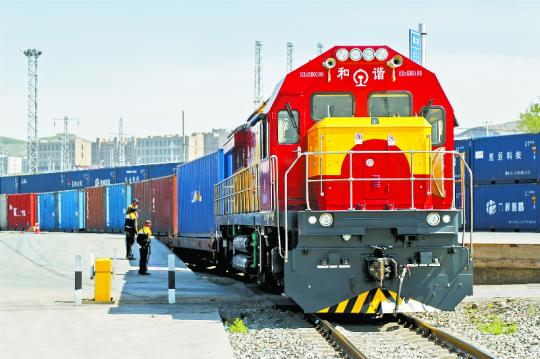 A China-Europe freight train bound for Almaty, Kazakhstan sets out from Urumqi, Xinjiang Uygur autonomous region, on May 25, 2019. [Photo/xjdaily.com]

China plans to invest 200 million yuan ($28.53 million) to build China-Europe railway distribution hubs in five cities of the country to better use railway sources and reduce costs, according to the National Development and Reform Commission, the country's top economic planner, on July 6.

The construction of China-Europe railway hubs will break the current separate status of the cities and better serve freight, said Wang Guowen, director of the center for logistics and supply chain management at the Shenzhen-based think tank China Development Institute, according to a 21st Century Business Herald report on Wednesday.

The construction of transportation hubs will enable cities to share resources, cut costs and improve efficiency.

According to Wang, most China-Europe freight trains pass Urumqi without stopping at the current stage, and the establishment of the new hub will enable domestic and foreign goods to travel on the trains at the same time to reduce costs.

Wang also suggested part of the 200 million yuan funds be used to build platforms for information sharing and coordinate trains running among the five cities, the report said.