Student steps up to raise money for disadvantaged 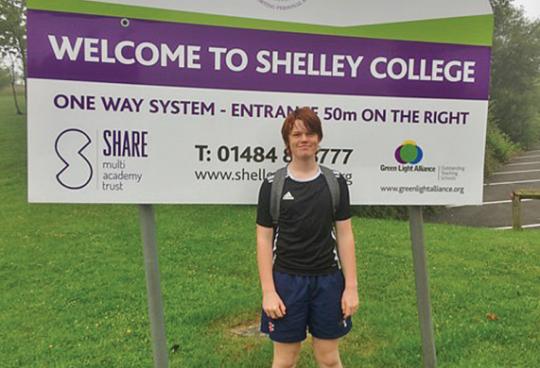 After walking to the school gates, Joshua Hoyle poses for a photograph, and then returns home. （Photo/China Daily）

With the United Kingdom government working to return the nation's students safely back to class, and some charities warning that children from disadvantaged backgrounds would be disproportionally affected by a delay, a 13-year-old schoolboy from Northern England has stepped up to try to make a difference.

Joshua Hoyle, a Year 10 student from Huddersfield who is being homeschooled during the lockdown, said he decided to try to raise money for less-fortunate youngsters.

He set out to collect 200 pounds ($249) for a charity that works with disadvantaged students by walking the 8 kilometers from his home to his school, carrying an increasingly large number of books each day.

Hoyle vowed to keep walking to school each day until the end of term time on July 17, despite not yet being among students who have been allowed back to school. He started the daily walks on June 15 and plans to walk the route for 32 days.

"Lockdown has been tough for me because I really enjoy school and have missed going during this extraordinary time," he said. "But I am so much luckier compared to other children who don't even get an education."

Hoyle said he wanted to find some sort of normality during the lockdown, so started getting up at 6.30 am to walk to the school gates, where he takes a photograph before returning home to do his schoolwork remotely. He set up a JustGiving page and has so far exceeded his 200-pound target by raising more than 7,500 pounds.

"I wanted to feel like I was at least going there and back, and I will also be adding a schoolbook to my bag each day, which will, in the end, add up to 32 books," he said.

SHINE, the charity he is raising money for, aims to help disadvantaged children in the North of England.

Hoyle said the students he wants to help "do not get the sort of education I and others do".

"This is to raise awareness and show how lucky we are, compared to many others," Hoyle said. "Hopefully, in the future, we will have a much more diverse and stable society with loads of opportunities for everyone."

Hoyle said his route to Shelley College, which lies between the villages of Shelley and Skelmanthorpe, is between 6.8 and 9 kilometers, depending on the road he takes, and can be walked in around an hour and a half.

Jim O'Neill, vice-chairman of the Northern Powerhouse Partnership, is involved with SHINE and hailed Hoyle's efforts as a "heartening development" to raise awareness about equal education opportunities in Northern England.

"While some young people have probably managed to cope with home-based learning during the COVID-19 lockdown, perhaps a few might have excelled," O'Neill said. "But it is pretty clear that the most disadvantaged have not. And, as in other areas of society, this crisis is exposing, and perhaps adding to the challenges of those who are most disadvantaged."

Fiona Spellman, the CEO of SHINE, said: "It made my day when I heard what Joshua is doing. He is an incredibly inspirational young man and everyone at SHINE is so grateful to him for his efforts. He has already raised an amazing amount of money which will make a real difference to the lives of disadvantaged children in the North. We wish him the very best of luck with his challenge."