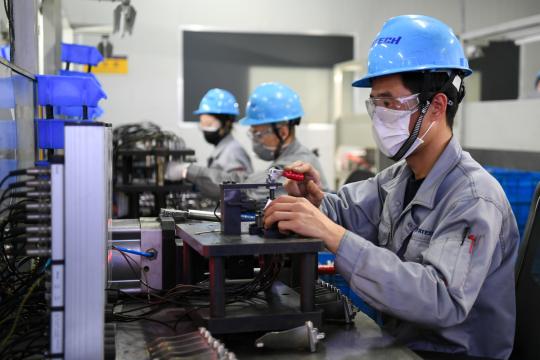 Technicians check the quality of products at an aircraft spare parts factory in Wuxi, Jiangsu province, on Feb 26. （Photo/Xinhua）

The Yangtze River Delta region has resumed most of its operations thanks to its quick response and effective measures after the outbreak of the novel coronavirus epidemic. In pursuing its ambitious plan to become a world-class industrial cluster, the region will likely overcome domestic and international economic challenges brought about by COVID-19, said experts.

"The uncertainties of the pandemic for China and the global economy will lead to the restructuring of existing global supply chains. This makes it necessary for us to build a world-class industrial cluster of our own," said Liu Zhibiao, head of the Yangtze Industrial Economic Institute at Nanjing University.

Liu said the global supply chain is about to evolve in two directions. One is the existing supply chain involving global enterprises that will be reformed into different functional and geographic units. The other involves concentration in one country or among several neighboring nations.

"In either case, it is highly likely that multinational corporations will form specialized industrial clusters in a comparatively smaller area so as to maintain economic efficiency during the restructuring," Liu said.

During adjustments to the global industrial chain, Liu said it will become more important than ever to build a domestic consumption-driven industrial chain in China, as well as bring about enhanced technological innovation.

China has its own strengths. This is especially the case with regards to its high-value labor resources, comparatively low land costs and relatively fair business environment with the world's most complete industrial categories, high efficiency, convenience and low cost supply chain, said Song Liang, director of the technology innovation research office at CCID Thinktank.

Considering the economic characteristics of various regions in China, the Yangtze River Delta stands out with its strong industrial assets, talent and technology, among other attributes, said Zuo Xuejin, a researcher at the Shanghai Academy of Social Sciences.

The Yangtze River Delta is one of the nation's most vibrant regions, with a dynamic economy, high levels of openness and strong innovation capabilities－all of which make for a high-quality development city cluster, said Liu Mingyu, an associate professor at the school of management, Fudan University.

Liu added that the region not only is home to advanced global manufacturing and modern services, but also has strong support industries and a complete supply chain.

The region consists of 26 cities from Shanghai municipality and Jiangsu, Zhejiang and Anhui provinces, covering merely 2.2 percent of the nation's land area but contributing to one-fifth of the nation's GDP.

There are more than 300 universities and colleges, and nearly 300 national engineering research centers and labs in the region. Patents registered within the region account for about 30 percent of China's total, Song said.

"The city cluster of the Yangtze River Delta region forms a complete industrial system, and the area has promised to become a premier industrial cluster," Song added.

As the COVID-19 pandemic continues to spread worldwide, it adds to the uncertainty of the global economy. Therefore, the establishment of a world-class supply chain will stabilize the region's capability in confronting economic unpredictability, Zuo said.

"Not only the Yangtze River Delta region, but all major Chinese economic regions－including the Guangdong-Hong Kong-Macao Greater Bay Area, the Beijing-Tianjin-Hebei region and the Chengdu-Chongqing city cluster－should take the opportunity from the restructuring of global industrial chains. With that, we can expect strengthened industrial competitiveness of the nation," said Nanjing University's Liu.