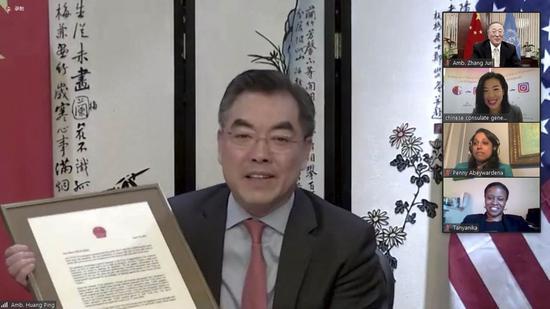 The Chinese Consulate General in New York donated 5,000 facial masks to a local primary school on Monday, providing help to students there in the ongoing fight against COVID-19.

"As a diplomat living in New York, I feel this is my privilege and also an obligation to join hands with everybody here to fight this pandemic, shoulder by shoulder," said Chinese Consul General in New York Huang Ping at a virtual handover ceremony.

The masks, sponsored by the Bethune Charitable Foundation in China, were donated to the Jermaine L. Green STEM Institute of Queens, a primary school with some 500 students, many of whom are from minority groups.

Huang expressed the hope that with the masks, the children could be better equipped during the challenging times.

Many countries, including the United States, extended a helping hand to China when China was in a tough battle against COVID-19 earlier this year, Huang said.

"The grace of dripping water shall be reciprocated by a gushing spring," he said. "As we are now in a better position, we should return the kindness."

The consul general urged China and the United States to lead the efforts against COVID-19, which would benefit not only the two peoples but the whole world. "By working together, we can win this war for sure."

He also thanked New York State Senator James Sanders Jr. for facilitating the donation, and extended an invitation to the school's students and teachers to go to China and establish friendships with the Chinese people.

Senator Sanders and representatives of the school, who also joined the virtual meeting, thanked Huang and the Consulate General for their generous support to secure the safety of students.

Tammy Pate, the community superintendent of District 28 in Queens where the school is located, said the donation "means more than we can express."