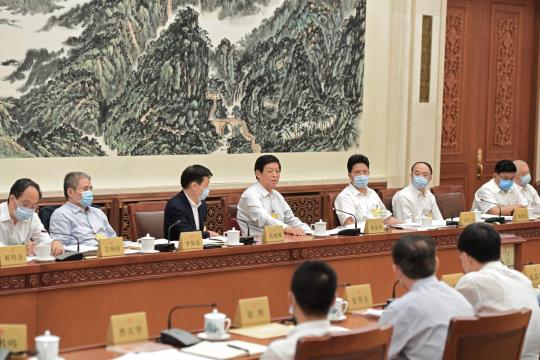 Li Zhanshu, chairman of the NPC Standing Committee, presides over a meeting during a second review of the draft national security law for Hong Kong in Beijing, on June 28, 2020. （Photo/Xinhua）

The Standing Committee of the 13th National People's Congress, China's top legislature, started a second review of the draft national security law for Hong Kong at its 20th session starting from Sunday.

Li Zhanshu, chairman of the NPC Standing Committee, presided over the meeting, where a report on the deliberation of the draft law on safeguarding national security in the Hong Kong Special Administrative Region was presented by Shen Chunyao, vice-chairman of the NPC Constitution and Law Committee.

The draft, formulated after the NPC adopted a decision in May to improve and establish the legal system and enforcement mechanisms for Hong Kong, went through its first deliberation by the NPC Standing Committee during its 19th session from June 18 to 20.

At the ongoing session, the NPC deputies, including some representatives from Hong Kong, said the second draft fully studied and adopted opinions from various sectors in the SAR and responded well to some public concerns.

They said its content is more accurately expressed and the specific measures listed in the draft are more practical and targeted, which is in line with the actual situation of the SAR.

They said the introduction and promulgation of the national security law in Hong Kong as soon as possible can effectively deal with the gaps in the law and other weaknesses in safeguarding national security, combat related criminal acts and well protect the SAR's prosperity and stability and its residents' legitimate interests.

The draft clarifies the four categories of crimes that threaten national security: secession, subversion of State power, terrorist activities and collusion with foreign or external forces.

Ahead of the session, the United States imposed visa restrictions on Chinese officials on Friday, a move condemned by the Commissioner's Office of the Chinese Foreign Ministry in the Hong Kong SAR the following day.

In a statement issued by the office, a spokesperson said accusations by the US that the central government of China has undermined the high degree of autonomy of the Hong Kong SAR are completely groundless and urged Washington to immediately correct its mistakes and stop meddling in the affairs of Hong Kong and China's internal affairs.

The spokesperson reiterated that the Chinese government is "rock firm" in advancing the legislation and urged the US to bear in mind that Hong Kong is part of China and its affairs are China's internal affairs.

"The national security legislation for the Hong Kong SAR is a major measure to reaffirm commitment to and improve the 'one country, two systems' principle, and a fundamental step to end the chaos in Hong Kong and preserve its peace and stability," the spokesperson added.

The legislation has gained wide support from members of the public in Hong Kong. Nearly 3 million Hong Kong residents have signed a petition endorsing the legislation, and over 1.28 million have signed an online petition opposing interference by the US and other external forces.