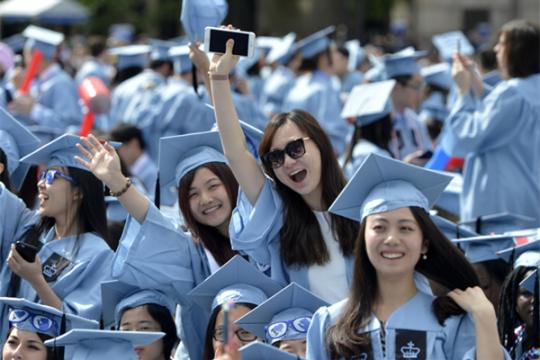 Chinese students celebrate their graduation from Columbia University on May 20, 2016. (Photo/Xinhua)

The United Kingdom has overtaken the United States for the first time as the most popular destination for Chinese students pursuing overseas study this year, a new report showed.

In a multiple choice survey for the annual Report on Chinese Students' Overseas Study, released on Sunday, the UK has become the most popular destination for overseas study this year, preferred by 42 percent of the respondents, which is up by 1 percentage point from last year.

Students who want to study in the U.S. continued to decline in 2020, accounting for 37 percent, down 6 percentage points from last year.

Australia and Canada tied for the third-most popular destinations for overseas study, accounting for 16 percent, respectively, followed by Japan, Germany and Singapore, the report found.

The report was based on a survey conducted by Vision Overseas Consulting Co, a subsidiary of New Oriental Education and Technology Group and Kantar Millward Brown, from January to March.

The survey covered 6,673 students who plan to go to school overseas and their parents. It is the sixth consecutive year the report was released.