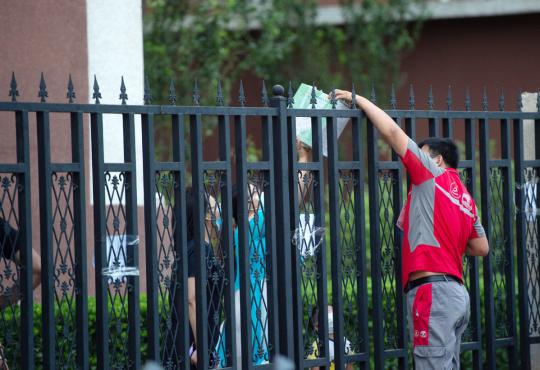 A delivery worker passes a parcel over a gate in Xicheng district, Beijing, June 17, 2020. (Photo/Xinhua)

More than 100,000 delivery workers in Beijing are to have received nucleic acid tests by Monday in order to provide safe service for residents amid the city's recent COVID-19 outbreak, right after the e-commerce midyear promotion ended, ushering in a busy period for logistics companies.

Starting from Friday evening, 17 postal service and logistics companies in Beijing have organized for about 103,000 delivery workers to receive nucleic acid testing, the State Post Bureau said on Saturday.

"Everyone has a responsibility to cooperate and contribute to Beijing's epidemic control and prevention," Wang Hailong, a deliveryman from YTO Express Co, was quoted as saying by China Central Television.

Wang went to a designated testing area in the capital's Shunyi district at 5 pm Friday after he delivered more than 200 packages during the day.

"The test is not just for our own health, but also for the safety of residents in the city," he said. "Under the strict and full protective measures, we will work hard to ensure dependable delivery service for the capital. Compared with doctors and nurses on the front line and social workers in all communities, we are just doing what we should do."

The State Post Bureau said due to the recent COVID-19 outbreak in the capital, some packages might take longer to arrive.

Logistics companies have taken strict measures, such as temperature monitoring of their staff and regular disinfection, to reduce risks related to the outbreak.

Zhao Xiaomin, a logistics industry expert, suggested that the companies set up emergency response teams to cope with similar incidents in the future, according to a China National Radio report.

So far, no COVID-19 case has been reported in the postal and logistics industry in the city.