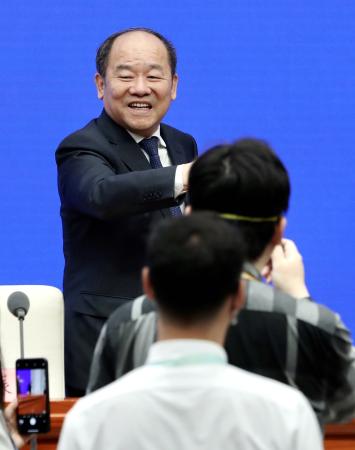 Ning Jizhe, deputy head of the National Development and Reform Commission, interacts with reporters while wrapping up a news conference on May 24, 2020 in Beijing. (Photo by Zou Hong/China Daily)

China's economy is gradually recovering with steady growth momentum despite disruptions from the COVID-19 outbreak, while it will take further steps to maintain economic stability and promote sustainable growth, according to the country's top economic regulator.

Ning Jizhe, deputy head of the National Development and Reform Commission, said that while the novel coronavirus pandemic severely disrupted the Chinese economy, the country's business is getting back to normal. It is doing so with the help of government measures in an orderly resumption of work and production as well as epidemic prevention and control, he added.

"In the next step, the government will make a big push to ensure 'six priorities' and stability in six areas for steady economic momentum, with a key focus on creating jobs, using policy tools, expanding domestic demand, resuming work and production, deepening reforms and opening-up," Ning said at a news conference on Sunday in Beijing.

China has decided not to set a target for this year's economic growth after full consideration of the uncertainties from the pandemic's effects.

"It's not the first time that China has set no specific target for economic growth," Ning added, saying government work reports for 2000, 2001 and 2002 also did not mention the GDP growth target.

"In fact, the economic indicator tasks have been broken into related indicators for other economic and social development goals, and we will work hard to achieve those goals," he said.

Yang Ruilong, an economics professor at Renmin University of China, said that amid the globally raging pandemic and its disruptions of foreign trade, setting a high growth target will result in an excessively strong economic stimulus plan, which might severely disrupt future economic development.

"Not setting a specific growth target is not equal to abandoning the pursuit of growth," he said during a recent China Macroeconomy Forum. "We need to maintain sustainable growth to meet a series of specific targets in the annual Government Work Report."

The NDRC said China will continue to open up its economy to more foreign investment, and a number of key, foreign-funded projects are expected to be launched this year in fields such as electronic information, new materials and advanced manufacturing.

Particularly, China will resolve any issues that foreign companies may face in resuming work and production, and pro-business policies for domestic enterprises will apply equally to foreign firms.

In the next step, the government will shorten the negative list of areas off limits to foreign investors－all other areas are presumed to be open－and release a new version for 2020, pursuing higher-level opening-up in services, manufacturing and agriculture.

"Our businesses in China showed remarkable resilience to COVID-19," Cotton added. "Of course, business was affected in Q1 and early Q2. But the insight our companies provide to help customers has never been more relevant－to understand how consumers will behave after COVID-19, what products they will buy, how to market to them and how to optimize sales on digital commerce platforms. Ascential has invested in launching and acquiring such services for customers in China and it has never been more important to do that more and faster."