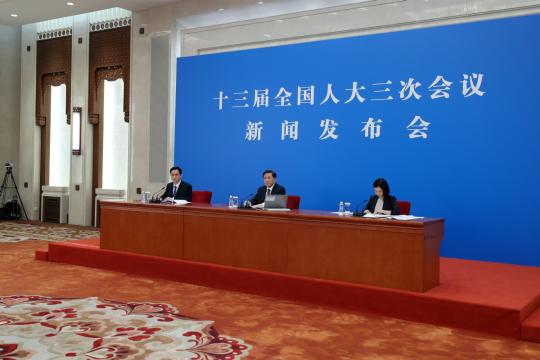 Zhang Yesui (center), spokesman for the third session of the 13th National People's Congress, briefs media at the Great Hall of the People on May 21. (WANG ZHUANGFEI/CHINA DAILY)

China will not accept unwarranted lawsuits or demands for compensation for the COVID-19 pandemic as accusations suggesting it is somehow to blame are groundless, Zhang Yesui, spokesman for the third session of the 13th National People's Congress, said on Thursday.

Zhang made the remark at a news conference before the opening on Friday of the annual session of the NPC, the nation's top legislature.

Such accusations against China in some recent U.S. bills or legislation go against international law and basic norms governing international relations, Zhang said, adding that Beijing strongly opposes them, will watch how the bills proceed and will respond accordingly with countermeasures.

Blaming others in order to deflect attention is irresponsible and immoral, he added.

China has acted with openness, transparency and responsibility, he said, and has promptly shared pertinent information with the World Health Organization and related countries.

China released the genome sequence of the virus and other information without delay, and it has engaged in international cooperation as much as it can, Zhang added.

The virus is a common enemy of all humanity, he said, and defeating it requires science, reason, solidarity and cooperation. He called for a rational attitude to prevail over prejudice and conscience to prevail over lies in order to win the fight against the pandemic and save more lives.

Zhang said that China-U.S. relations are at a critical juncture, and the key issue is to ensure that this relationship is defined by a spirit of non-conflict, non-confrontation, mutual respect and win-win cooperation.

History has made it abundantly clear that both countries stand to gain from cooperation and lose from confrontation, he said, adding that cooperation is the only correct choice for both sides.

If the U.S. would respect China's social system and development path, rationally view China's development and its strategic intentions and be committed to interacting with China in a constructive way, the two countries can work together in a mutually beneficial way in bilateral matters as well as on regional and global issues, he said.

The spokesman denied that the impact of COVID-19 on foreign-invested companies in China has led to a large-scale outflow of foreign capital from the country.

The pandemic will have a complicated impact on economic globalization in many ways, but it will not go so far as to reverse the historical course of globalization, Zhang said.