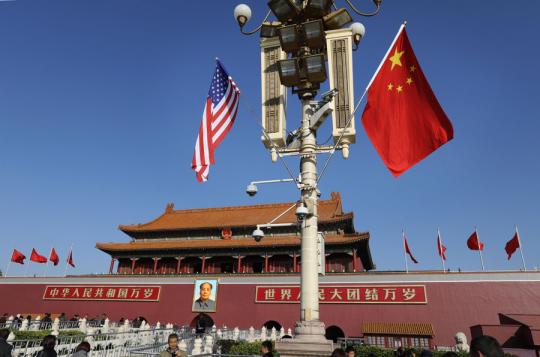 National flags of China and the U.S. are hung up on the lamp posts in front of the Tian'anmen Rostrum. (Zhu Xingxin/China Daily)

When it comes to China's current relationship with the United States, China expert David Firestein could not help but point out how much it had deteriorated.

"It's really a tough time right now to talk about any notion of cooperation even though I believe working together on something like COVID-19 is far preferable to going it alone," said Firestein, president and CEO of the George H.W. Bush Foundation for U.S.-China Relations.

He said the very idea that the two countries ought to work together to deal with COVID-19 had become controversial in the U.S..

"Chinese President Xi Jinping made the point in a recent address to the World Health Assembly that we have a common challenge and we ought to work together on such matters as vaccine development and cushioning the impact of COVID-19 on the developing world, which has yet to bear the pandemic's full brunt," he said. "Such proposals used to be viewed as sensible, moderate and pragmatic."

Firestein said that view is not shared at the federal level and "represents a very sad state of affairs because we miss opportunities to work together, to actually make a positive difference with respect to COVID-19. That's very shortsighted and very unfortunate."

Despite the tension and rhetoric at the highest levels of government, Firestein sees positive exchanges continuing to happen at the subnational levels－between states and provinces, between Chinese and U.S. cities, and within the private and nonprofit sectors.

"There are still some spheres of functional and valuable engagement between the two countries," he said.

When the novel coronavirus broke out in China in January, the foundation quickly formed the U.S.-China Coronavirus Action Network to procure personal protection equipment to help the Chinese people fight the virus.

When the pandemic hit the U.S. hard, the foundation shifted gears and used its network to bring large quantities of China-sourced masks to Texas, New York and other U.S. states.

"We at the foundation continue to do what we can to support the development, or at least maintenance of, a functional and pragmatic relationship between the United States and China," Firestein said.

"We do what we can to try to make a positive difference in people's lives. That spirit animates our work."

Firestein said that people the foundation works with are often grateful to the people of China for making equipment available on a charitable basis. The Chinese people are reciprocating the goodwill earlier shown by the U.S. people toward China.

He believes that the U.S. is better off having a functional relationship with China.

"It's in America's interest to have a relationship with China that is not dysfunctional, one in which we can work together on a host of global issues such as the COVID-19 pandemic, other major global health issues, climate change, issues related to the developing world, political and military issues, such as the Korean Peninsula nuclear situation, and others.

"I think the greater likelihood of success for the U.S. and the world on any of these issues is generated when the U.S. and China, among others, work together in a common cause to deal with common challenges," he said.

Firestein pointed out that in the U.S. there is still a desire in some corners to engage and work together.

"The scientific community continues to want to collaborate, for example, on the sharing of best practices for dealing with COVID-19 and developing a vaccine for the virus. There are a lot of things that can be done, and that I think will have to be done, at the subnational level for the foreseeable future."

Speaking about the bleak outlook in the near term for U.S.-China relations, Firestein said, "I'm not sure I see any light at the end of the tunnel at this point－but I intend to keep walking forward until I do."