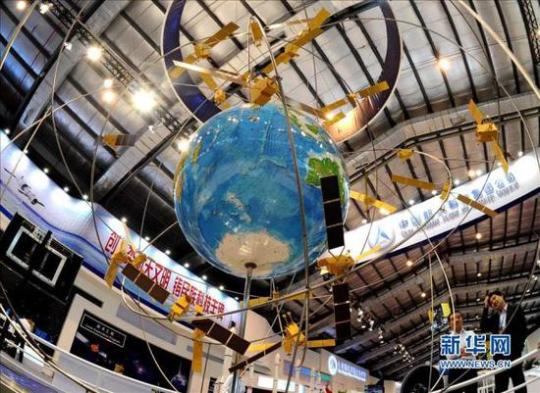 A model of the Beidou Navigation Satellite System exhibited in Zhuhai. (Photo/Xinhua)

China's Beidou Navigation Satellite System has been used in more than half the world's countries and regions, according to the system's chief designer.

Yang Changfeng, who is also a national political adviser, said on Thursday afternoon that the system will soon be accessible to every user in "any corner on this planet" to offer navigation and positioning services.

"This year will mark the completion of the Beidou network. The last satellite in it has been transported to the Xichang Satellite Launch Center and is undergoing prelaunch preparations. It will lift off in June," he said.

He made the remarks as he spoke to reporters in the Great Hall of the People in Beijing before the opening of the third plenary session of the 13th Chinese People's Political Consultative Conference, the top political advisory body.

Beidou is the country's largest satellite-navigation system and one of the four global networks, along with the United States' GPS, Russia's GLONASS and the European Union's Galileo.

Beidou is widely used in many public services in China and globally, including transportation, agriculture and disaster relief. It is also playing a helpful role in the ongoing fight against the coronavirus outbreak, the scientist said.

About 70 percent of mobile phones registered in China are compatible with Beidou-enabled services, Yang noted.

The nation began the research and development of its own space-based navigation and positioning system in 1994, aiming to lessen reliance on foreign networks.

The deployment of Beidou's space-based assets accelerated in the past two years, with 17 launches placing 29 satellites in orbit. The most recent launch took place in March.

Beidou began providing positioning, navigation, timing and messaging services to civilian users in China and other parts of the Asia-Pacific region in December 2012. At the end of 2018, it started to provide global services.