UN lays out roadmap to lift economies, save jobs after COVID-19 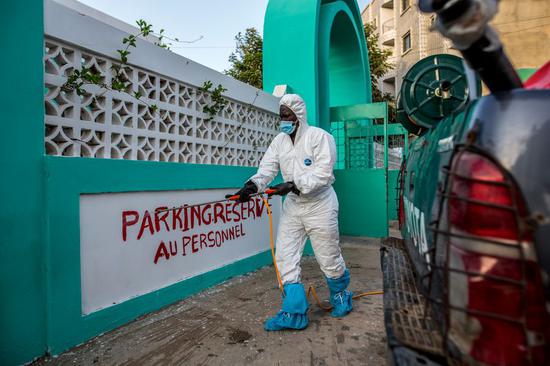 In a new framework released Monday as a roadmap to support countries' path to social and economic recovery, the United Nations called for an extraordinary scale-up of international support and political commitment to ensure that people everywhere have access to essential services and social protection.

The "United Nations Framework for the immediate socio-economic response to COVID-19: Shared responsibility, global solidarity and urgent action for people in need" called for protecting jobs, businesses and livelihoods to set in motion a safe recovery of societies and economies as soon as possible for a more sustainable, gender-equal, and carbon-neutral path - better than the "old normal," according to a press release obtained by Xinhua.

This new framework sets the way UN entities will deliver this vision on the ground, it said. "Decisions made in the next few months will be crucial for the progress towards the Sustainable Development Goals (SDGs)."

Noting that during the Ebola outbreak in 2014, more people died from the interruption of social services and the economic breakdown than from the virus itself, the framework focused on protecting the needs and rights of those most affected by the pandemic, starting with the most vulnerable countries, groups, and those who risk being left behind, said the press release.

Drawing lessons from the 2008-2009 global economic and financial crisis, the framework noted that countries with strong social protection systems and basic services suffered the least and recovered the fastest. To prevent billions of people from sliding into poverty, governments around the world will need to rapidly adapt, extend and scale-up safety "cushions," such as cash transfers, food assistance, social insurance schemes and child benefits to support families.

For the impacts of COVID-19 to be reduced, the United Nations called for an extraordinary scale-up of support to cope with the challenges ahead, including immediate social protection responses that consider differentiated impacts on vulnerable groups, children, women, men, and those in the informal sector.

"This is particularly urgent considering that 4 billion people, more than half of the world population - including two out of three children - have no or inadequate social protection," said the press release.

While a significant proportion of the existing 17.8 billion U.S. dollars portfolio of sustainable development programs across UN entities will be adjusted towards COVID-19 needs, given the scale and scope of the socio-economic impact of the pandemic, additional funds will be required, said the press release.

To support these efforts, the secretary-general launched the UN COVID-19 Response and Recovery Fund, a UN inter-agency fund mechanism to help support low- and middle-income program countries to overcome the health and development crisis caused by the COVID-19 pandemic and support people most vulnerable to economic hardship and social disruption.

The financial requirements of the fund are projected at 1 billion dollars in the first nine months and will be subsequently reviewed. The secretary-general also called for a multilateral response that amounts to at least 10 percent of global gross domestic product (GDP) to mount the most effective response to crisis the world has ever seen.

There will be no return to the "old normal," the framework document stated. The pandemic is a blow to developing and emerging economies that already face binding constraints of debt and limited fiscal space, with several developing countries needing urgent debt relief. Its impacts will be especially devastating for the most vulnerable countries - those in humanitarian or conflict settings.

The United Nations also called for a massive fiscal and financial repurposing in the next weeks and months, including the redirection of fossil fuel subsidies to aid the response.