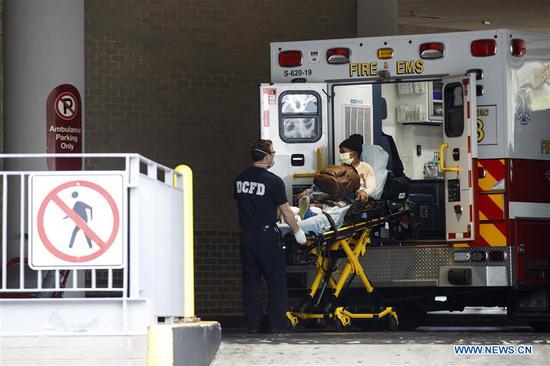 A medical worker wheels a patient from an ambulance to George Washington University Hospital in Washington D.C., the United States, on April 27, 2020. (Photo by Ting Shen/Xinhua)

Global COVID-19 cases crossed the 3 million mark Monday, with nearly one-third of them in the United States as business economists' outlook about the country's economy got darkened.

Global confirmed COVID-19 cases topped 3 million on Monday, reaching 3,002,303 as of 1 p.m. (1700 GMT), according to the Center for Systems Science and Engineering (CSSE) at Johns Hopkins University.

A total of 208,131 people worldwide have died of the disease, according to the CSSE.

Other countries with over 100,000 cases included France, Germany, the United Kingdom and Turkey, the CSSE date showed.

A majority of U.S. business economists has a darkened outlook for the country's economy since the virus set in, according to a new survey released Monday by the National Association for Business Economics (NABE).

The outlook for inflation-adjusted gross domestic product (real GDP) in 2020 reversed sharply, with 86 percent of respondents expecting a contraction, said the survey conducted April 13-16 among 107 NABE members on business conditions in their firms or industries.

The April 2020 NABE Business Conditions Survey "represents a very different world than the one we inhabited during the last survey in January," said NABE President Constance Hunter, chief economist at KPMG.

A third of respondents said their firms' operations had been "severely impacted" by the COVID-19 outbreak, including a few firms that had had a "full suspension of operations," according to Greene.

Sixty-three percent of respondents indicated their firms had imposed a hiring freeze in response to challenges from the virus, the survey showed. In addition, 31 percent of companies furloughed employees, and 17 percent terminated part of their workforce.

The U.S. economy could contract at its worst rate since the Great Depression later this year due to the coronavirus crisis, warned Kevin Hassett, a senior economic advisor to President Donald Trump's administration,

The initial look at gross domestic product for the first quarter, out on Wednesday, will be a negative number, the real damage to the economy from the coronavirus will be revealed further down the road, Hassett said Monday on CNBC's "Squawk Box."

"You're looking at something like minus 20% to minus 30% in the second quarter," he said.

The U.S. states and federal government are trying very hard to balance the public health risk posed by the virus with the severe cost of month-odd shutting down of the country's economy.

Over a dozen states, including Georgia, Oklahoma, Tennessee, Mississippi, Texas, Colorado and Iowa, have begun to ease restrictions on lockdowns in hopes of restarting the economy.

White House unveiled on April 16 three-phase guidelines for reopening the U.S. economy, putting the onus on governors of making decisions about their states' economies.

The plan urges governors to issue uniform, statewide protocols for retailers to adopt as they reopen stores and work to keep employees and customers safe.

INQUIRY LAUNCHED INTO HALTING OF FUNDING WHO

U.S. House Committee on Foreign Affairs launched an inquiry into the Trump administration's decision to halt funding to the World Health Organization (WHO), committee chairman Eliot Engel said on Monday.

In a letter to Secretary of State Mike Pompeo, the Democratic congressman decried the decision to halt funding as a political distraction from the administration's response to the COVID-19 and demanded that the State Department produce records and information dealing with the decision.

"President Trump's decision to halt funding for the World Health Organization (WHO) in the midst of a global pandemic is counterproductive and puts lives at risk," Engel wrote in the letter.

"Attacking the WHO, rather than the COVID-19 outbreak, will only worsen an already dire situation by undermining one of our key tools to fight the spreading disease," said Engel.

The chairman set a deadline of May 4 for the State Department to hand over documents regarding the decision to withhold funding from the WHO.

Claiming the WHO failed to share information in a "timely and transparent fashion," President Donald Trump earlier this month decided to halt his nation's funding to the agency, a move that has drawn opposition at home and abroad. Enditem