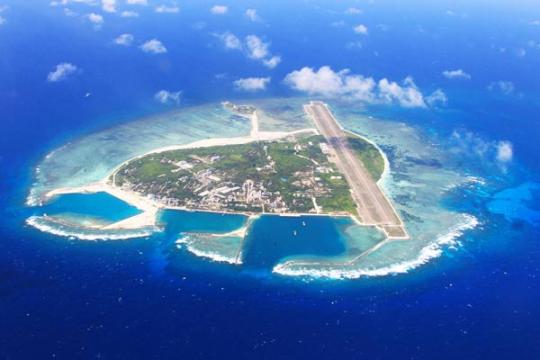 Yongxing Island is home to the government of Sansha, China's southernmost city. (Photo/Xinhua)

Sansha, China's southernmost island city, which administers vast island groups and their surrounding waters in the South China Sea, has set up two districts, the Ministry of Civil Affairs announced on its website on Saturday.

The move was approved by the State Council, said the ministry, which oversees the establishment of administrative regions and their boundaries.

Sansha was established in July 2012 to administer more than 200 islets, sandbanks and reefs of the Xisha, Zhongsha and Nansha islands and the 2 million square kilometers of surrounding waters. It is under the jurisdiction of Hainan, China's southernmost province.

The city has the largest water area and the least land of any Chinese prefecture-level city.

The city government, located on Yongxing Island, manages 10 communities. There are about 1,800 residents and an unknown number of military personnel.

Since its establishment, the city has been investing heavily in building infrastructure. This includes a large number of public service facilities, including a primary school, a kindergarten, a vocational education center, an emergency-response materials warehouse, desalination plants and wastewater and garbage disposal stations.

Two multifunctional lighthouses have been built and are in operation on the Nansha Islands' Huayang and Chigua reefs, aiding the navigation of passing vessels.