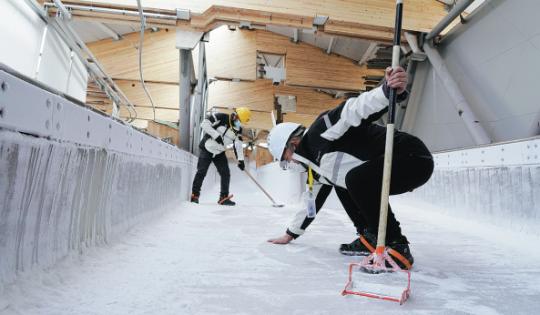 Preparations for the 2022 Beijing Winter Olympics are expected to be affected by the postponement of the 2020 Tokyo Games. (Photo/Xinhua)

China's sports officials and athletes are embracing the Olympics' one-year delay with a positive mindset, despite the many challenges the postponement presents.

With the Tokyo Games now rescheduled for July 23-Aug 8 next year due to the coronavirus pandemic, China's sports governing bodies have voiced cautious support for the decision as they begin to evaluate the postponement's impact on the country's sporting landscape.

In a statement released on Tuesday, the Chinese Olympic Committee said it will make sure that all parties involved in the delay prepare properly for the postponed Games.

"The COC supports the decision of the International Olympic Committee, and believes that the IOC and the Tokyo Olympic organizing committee will well handle the relevant issues and successfully host the Tokyo 2020 Olympics," read the statement.

"The COC will continue to maintain close communications with the IOC, the Tokyo 2020 organizers and each sport's world governing body, to continue analyzing, assessing and properly responding to the follow-up tasks, and to actively adjust China's preparations to the revised Tokyo 2020."

The delay of the Summer Games, which were originally scheduled to open on July 24 this year, also presents challenges for the 2022 Beijing Winter Olympics, perhaps most significantly the shrinking of its original two-year marketing window.

The shortened period between both events has sparked concerns that media coverage, sponsorship revenue and public interest for the winter sports extravaganza could be diminished.

However, Beijing 2022 has reiterated that the adjustment won't slow down its efforts to prepare for a successful Winter Games.

"The new dates for the Tokyo Olympic and Paralympic Games mean we are faced with a special situation where the Summer Games and Winter Games are to be held within half a year of each other," an anonymous official of the Beijing 2022 organizing committee told Xinhua on Tuesday.

"We will have a detailed assessment of how the new dates of Tokyo 2020 will affect the Beijing 2022 Games. We believe the Summer Games in Tokyo and the Winter Games in Beijing will both be a success," the official added.

However, with the Summer Olympics traditionally outshining the Winter Games in scale, marketing potential and audience appeal, delivering Beijing 2022 less than a year after the Olympic flame goes out in Tokyo will be far from straightforward.

"It now becomes a challenge for Beijing 2022 and the rest of the big events scheduled after the delayed Tokyo Games, such as the 2022 Asian Games in Hangzhou, to maintain the exposure and potential investment from sponsors to the level they would've enjoyed had it not been for the postponement," Li Hai, a sports economy professor at Shanghai University of Sport, told shobserver.com.

IOC president Thomas Bach has admitted that the convergence of three Olympic events, including the 2022 Youth Games in Dakar, Senegal, poses major challenges for the Olympic Movement.

"We will have to see now in the months to come what this means and how to organize this in a way which is feasible for staff, who are already working extremely hard," Bach said in a teleconference with media on March 25.

Now with their quests for Olympic glory in Tokyo extended by a year, Chinese athletes and teams are having to reset their clocks while trying to maintain the same energy and focus.

Sprinter Su Bingtian, 30, has welcomed the delay, believing it could actually benefit veterans such as himself.

"I've gradually been recovering from an old injury on my waist. I am better now strength-wise and in regards to my all-round technique. I am confident of going to Tokyo," the 100-meter Asian-record holder told China Sports Daily on Tuesday from the national team's closed-door training camp in Beijing.

Guangdong native Su, who will be 32 by the time the Tokyo Games open next July, is among a number of Chinese veterans who are now facing a challenging 12 months to stay in peak condition and form.

Swimmer Liu Xiang, who owns the women's 50m backstroke world record, is also endeavoring to take the disruption in her stride.

In a statement released by her marketing agency, Win &Pioneer Sports, the 23-year-old said: "I will make some adjustments to my training plans with my coach, but no matter what arrangements we have to change, the key is to keep improving to become a better swimmer. This never changes."