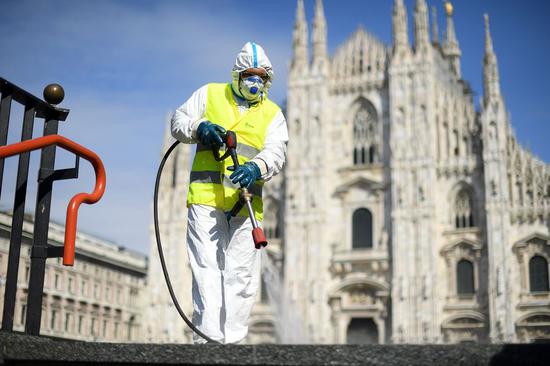 A sanitation worker wearing a protective suit and a face mask cleans the ground at Piazza del Duomo in Milan, Italy, on March 31, 2020. (Photo by Daniele Mascolo/Xinhua)

In the next few days, the world will see confirmed COVID-19 cases reach one million and death tally climb to 50,000, the chief of World Health Organization (WHO) noted on Wednesday.

"As we enter the fourth month since the start of the COVID-19 pandemic, I am deeply concerned about the rapid escalation and global spread of infection," WHO Director-General Tedros Adhanom Ghebreyesus said at a daily briefing.

Noting a near-exponential growth of new COVID-19 cases over the past five weeks around the world, Tedros said the death toll has more than doubled in the past week.

As of 18:00 CET Wednesday, the pandemic has killed 40,777 people worldwide, as a total of 827,419 infections were reported by over 200 countries and regions, the WHO situation dashboard indicated.

Outside China, the number of cases surged to 744,781, while 37,456 patients have died as of Wednesday afternoon.

Other than those countries with a vast number of cases, Tedros warned that Africa, Central and South America which had reported relatively fewer confirmed cases so far, could see serious social, economic and political consequences of COVID-19.

He stressed that it is critical to ensure those countries and regions are well equipped to detect, test, isolate and treat cases, as well as identify contacts.

Besides, Tedros called on governments to put in place social welfare measures to ensure vulnerable people have food and other life necessities during the crisis.

"Many developing countries will struggle to implement social welfare programs of this nature," Tedros said, noting that debt relief is essential to enable those countries to take care of their people and avoid economic collapse. Enditem