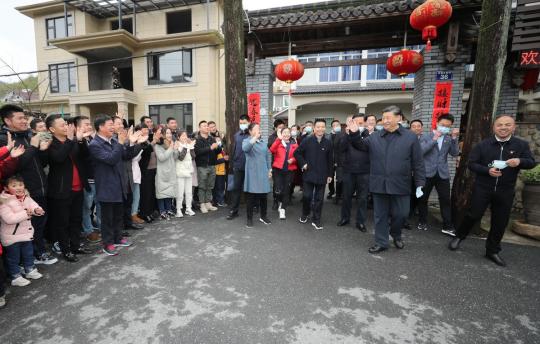 President Xi Jinping greets villagers in Yucun in Zhejiang province's Anji county on Monday during his inspection tour of the village, where he learned about local efforts to promote green development. (JU PENG/XINHUA)

President Xi Jinping instructed government officials on Wednesday to take more measures to coordinate disease prevention and the resumption of economic production in an effort to fulfill this year's development goals.

Xi, who is also general secretary of the Communist Party of China Central Committee and chairman of the Central Military Commission, made the remark at a conference on the conclusion of his four-day inspection tour of Zhejiang province.

He urged officials to fully implement the decisions and measures set out by the CPC Central Committee and coordinate disease prevention and economic development work.

Xi said that after a period of hard work, the situation in China is moving steadily in a positive direction, but the virus is still spreading fast overseas, posing increasing threats to the country.