China to implement 2.5-day weekend to boost consumption after COVID-19 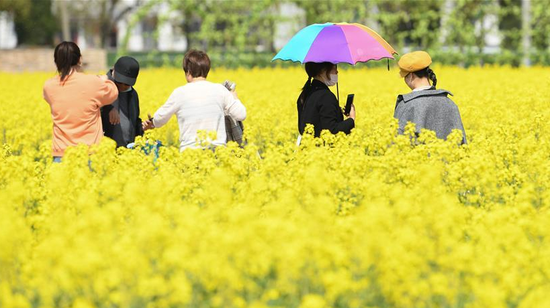 A 2.5-day weekend will finally happen in China as three provinces and cities announced plans to implement a more flexible working schedule to stimulate consumption after the COVID-19 outbreak.

The move came amid an economic downturn triggered by the nationwide outbreak.

Authorities in east China's Jiangxi Province took the lead and planned to implement a 2.5-day weekend starting April to encourage more employees to go on vacations during the weekends and holidays.

Other new incentives include giving half-price tickets to tourists in some local scenic spots and offering travel vouchers to employees, according to the official document released by local authorities on March 20.

Nevertheless, the new measures are totally voluntarily and companies have the right to decide how to implement them according to the rules and situation, explained an official from the local department of culture and tourism.

The 2.5-day weekend is more flexible than long holidays and allows employees to go on short-term vacations during weekends, which can stimulate tourism consumption in surrounding areas and boost the local economy, said the official.

The announcement has raised heated discussions on Chinese social media as many netizens expressed their excitement over the new measures. Some said the policy should be implemented nationwide while others worried that some small- and middle-scale companies would not implement the initiative to maintain maximum profits.

China was almost completely shut down as the outbreak began across the country in late January. To contain the spread of the disease amid the Spring Festival rush, many non-essential businesses were required to shut their doors to the public, including restaurants, cinemas and shopping malls. Tourism and airline industries were also hit hard as many canceled their trips due to the epidemic.

As the coronavirus situation is gradually improving in China and many cities and provinces have reported no new cases for weeks, local authorities are rolling out policies to boost consumption to help revive the economy.

Total tourist arrivals are expected to drop by 932 million compared to the previous year and revenue to decline by 1.18 trillion yuan (16.7 billion U.S. dollars).