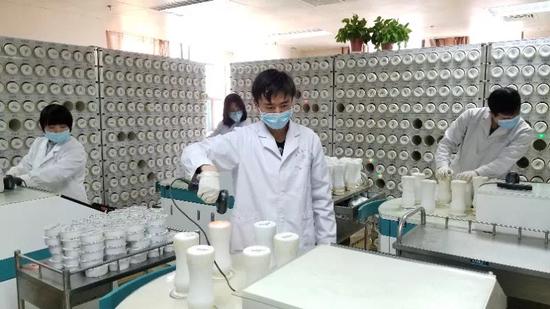 Clinical observation has shown that traditional Chinese medicine is effective in the treatment of COVID-19, and China is willing to share this unique experience with the rest of the world, a leading TCM official said on Monday.

A total of 74,187 confirmed patients, which account for 91.5 percent of the total infections on the Chinese mainland, have been administered TCM as part of their treatment, and over 90 percent of them have shown improvement, according to Yu Yanhong, Party secretary and top official of the National Administration of Traditional Chinese Medicine.

About 13 percent of the medical staff that has sustained medical care in Hubei, or more than 4,900, are TCM medical workers, she said, adding that the size and strength of the TCM assistance teams were unprecedented.

"The practice of treating COVID-19 has proved once again that the precious wisdom left by our TCM ancestors is still practical, effective and economical," she said.

"We would love to share these valuable experiences and effective treatment methods with all countries."

China has sent TCM expert teams together with prescriptions to Italy, which has been hit hard by the novel coronavirus pneumonia pandemic, and some of the country's leading TCM experts shared their treatment experience with US counterparts last week.

Although TCM is different from Western medicine, Huang Luqi, president of the China Academy of Chinese Medical Sciences, said that he had confidence that Western patients would accept TCM, and sufficient clinical practice also has proved that TCM is effective in treating COVID-19.

"TCM and Western medicine may come from two different medical systems and have different perspectives on health and diseases, but they are both based on the standard of factual clinical efficacy," he said.

Huang said that because of this same standard, Chinese scientists such as Tu Youyou discovered artemisinin in an herb to treat malaria, earning her a Nobel Prize in physiology or medicine in 2015, and 103 member states of World Health Organization have approved the use of acupuncture.

Qiu Haibo, deputy head of Zhongda Hospital of Southeast University in Nanjing, Jiangsu province, who has been assisting in the treatment of COVID-19 patients in Wuhan, said that modern TCM increasingly follows an evidence-based medical approach and uses randomized controlled trials to evaluate its efficacy.

For example, the Shanghai Institute of Organic Chemistry of the Chinese Academy of Sciences has conducted in vitro experiments and discovered that chemical components in Xuebijing, which is made of herbal extracts, can inhibit virus replication and inflammation as well as prevent excessive blood clotting when injected.

This injection was widely applied to severely and critically ill patients in the treatment of COVID-19 and has proved to be effective, Qiu said.

At the news conference, six typical Chinese prescriptions were recommended, including the Lianhua Qingwen capsule, often used for flu, and the Xuebijing injection, which is used against pneumonia.

China has sent about 100,000 boxes of Lianhua Qingwen capsules to Italy, and will possibly send another 100,000 boxes soon at the request of Italy, said Zhang Boli, an academician at the Chinese Academy of Engineering and president of Tianjin University of TCM.