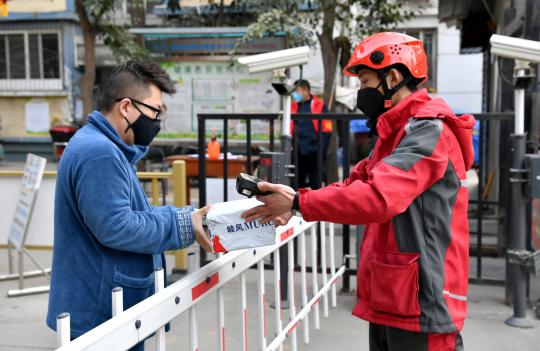 A deliveryman, right, hands a package to a resident at the gate of a residential community in Xi'an, capital of Shaanxi Province. (Photo/Xinhua)

China will come up with more policy measures to boost consumption, a key growth driver, in sectors like services, tourism, healthcare and in lower-tier cities to bolster the economy, government officials said on Wednesday.

"With daily lives and production returning to normalcy, the pent-up consumption demand will be unleashed after the epidemic ends," said Ha Zengyou, director-general of the department of employment and income distribution under the National Development and Reform Commission, the nation's top economic regulator.

"Meanwhile, new types of consumption will continue to grow, such as online shopping and other online services, providing new impetus to economic growth," he said, adding that efforts will be focused on identifying new modes of consumption and promoting consumption upgrades.

The NDRC will speed up the construction of new infrastructure such as 5G networks and data centers, promote the growth of both online and offline consumption and encourage the use of smart green products.

More efforts will be made to ensure the basic consumption demand for food and clothes, increase the consumption of cultural tourism and catering, promote higher quality and capacity expansion in the elderly and child care sectors, boost consumption and unlock demand in the third-and fourth-tier cities and rural markets, Ha said.

Wang Bin, deputy director-general of market operation and consumption promotion department under the Ministry of Commerce, said China's consumption sector is expected to gradually recover from the fallout of the epidemic in the long run.

The COVID-19 epidemic has a relatively large short-term impact on consumption, but the influence would become moderate in the medium term The consumption sector will gradually recover as government policies start to bear fruit, Wang said.

He said that the contagion is a "severe test" for China's ability to eliminate market risks and ensure goods circulation, but it won't change the trend of long-term stability and continuous consumption upgrade. The average daily sales of key retail enterprises monitored by the Ministry of Commerce in late February rose by 5.6 percent compared to mid-February. In early March, the average sales grew by 0.5 percent on a monthly basis.

Wang said the government will come up with more solutions to stimulate consumption in key products like automobiles, furniture and home appliances. It will make changes on the restriction policies for automobile purchases in some cities across China, and support local governments to formulate reward and compensation policies to encourage manufacturers to conduct trade-ins for electronic products.

Owing to the outbreak, retail sales of passenger vehicles dropped by 47 percent on a yearly basis during the first 15 days of March, while in February it fell by 79 percent to 310,000 units, according to data released by the China Passenger Car Association on Wednesday.

Zhang Yunling, former director of international studies at the Chinese Academy of Social Sciences, said more policy measures should be provided to boost short-term demand by speeding up the full recovery of the supply chain. To better cushion the blow of the ongoing epidemic on economic activity, financial subsidies should be offered to businesses and households, particularly to those in the hardest-hit areas and less-developed regions, he said.