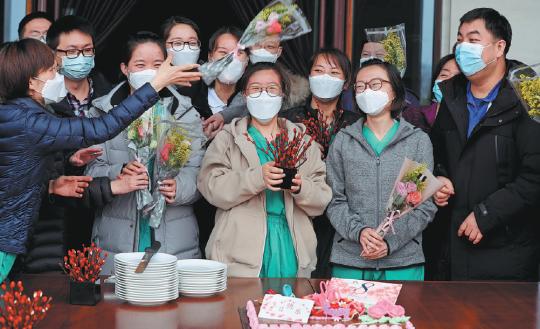 Members of a medical team from ChinaJapan Friendship Hospital celebrate International Women's Day in Wuhan, Hubei province, on Sunday. They also celebrated the birthdays of five colleagues who were born in March. (ZHU XINGXIN / CHINA DAILY)

Ji Dongmei, a chief nurse at Beijing Geriatric Hospital, worked for nearly two months treating patients with SARS in Beijing 17 years ago. This year, she has been fighting a more infectious disease in a different city.

Since arriving in Wuhan, the epicenter of the novel coronavirus outbreak in China, in late January, Ji and her six colleagues, along with some other nurses and doctors sent by Beijing's health authority, have been helping to treat critically ill patients at Wuhan Union Hospital.

"We will stay here until the epidemic is over," Ji said.

Like Ji and her colleagues, 42,600 medical workers from outside Hubei have joined local medical staff in Wuhan to combat the coronavirus. Among them, 28,000 are women. Some are veterans such as Ji, and many others are providing medical services in another city for the first time.

On Sunday, International Women's Day, President Xi Jinping extended his greetings to women fighting COVID-19 at the front line, including medical staff, and in other fields.

Xi, who is also general secretary of the Communist Party of China Central Committee and chairman of the Central Military Commission, also expressed his greetings to women of all ethnic groups and from all walks of life in the country.

Female medical workers have fought day and night at the front line against the epidemic to rescue COVID-19 patients, showing a noble spirit of benevolence, Xi said.

Xi called on the female medical workers to have firm conviction in winning the battle against COVID-19, maintain high morale, protect themselves, and make continuous efforts in fighting the epidemic.

The Chinese mainland recorded 44 new confirmed cases of novel coronavirus infection and 27 deaths on Saturday. Meanwhile, 84 new suspected cases were reported. Also on Saturday, 1,661 people were discharged from hospitals after recovery, while the number of severe cases decreased by 225 to 5,264.