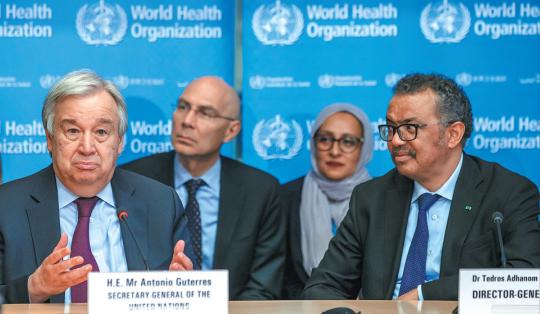 United Nations Secretary-General Antonio Guterres, with World Health Organization Director-General Tedros Adhanom Ghebreyesus, talks at the WHO headquarters in Geneva on Monday about the global fight against the novel coronavirus pneumonia outbreak. (Photo/XINHUA)

United Nations Secretary-Gene-ral Antonio Guterres on Monday praised China's contribution to the global fight against the novel coronavirus pneumonia outbreak, noting that the Chinese people are making efforts for all of humanity.

The UN chief expressed his gratitude to all of the people in China who are sacrificing many aspects of their normal lives to prevent the virus from further spreading, after discussing the outbreak with World Health Organization Director-General Tedros Adhanom Ghebreyesus in Geneva.

Guterres said the decline in the number of new cases in China since the beginning of February is a very good sign, and he expressed the hope that this trend will be maintained on a continuous basis.

The UN chief also urged all countries to "do everything to be prepared" to contain the epidemic, stressing that the principles of non-discrimination, non-stigmatization and human rights should be respected.

"If some fail, if some do not do everything that is needed, this disease can still become out of control, with dramatic consequences for global health and the economy," he warned.

Meanwhile, the WHO warned on Monday against using the word "pandemic" to describe the current outbreak.

Tedros said there is a lot of speculation about whether the increase in the number of cases outside China means the epidemic has become a pandemic.

By Monday, the WHO had received reports outside China of 2,074 cases — and 23 deaths — in 28 countries. Tedros described the sudden increases in cases in Italy, Iran and South Korea as "deeply concerning".

The WHO declared a public health emergency of international concern at the end of January, the highest level of alarm according to the WHO.

Tedros explained that the WHO's decision about whether to use the word "pandemic" to describe an epidemic is based on an ongoing assessment of the geographical spread of the virus, the severity of disease and the impact it has on the whole of society.

"Does this virus have pandemic potential? Absolutely. Are we there yet? From our assessment not yet," Tedros said. "Using the word 'pandemic' now does not fit the facts, but it may certainly cause fear," he said.

The WHO chief emphasized that people should focus on containment, while doing everything they can to prepare for a potential pandemic.

Michael Ryan, executive director of the WHO's Health Emergencies Program, said that the WHO still does not understand the absolute transmission dynamics of the virus.

He emphasized that there is still time to prepare. "So we are in a phase of preparedness for a potential pandemic," he said, adding that countries are having success in doing that, clearly referring to the continued decrease in the number of new cases in China.