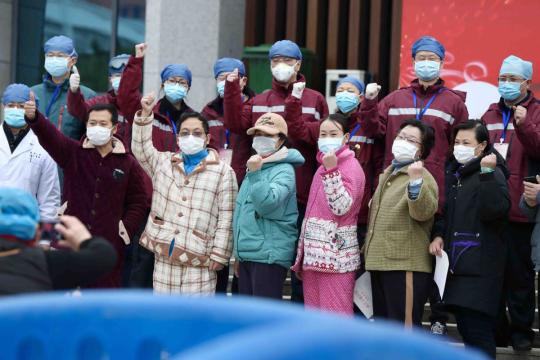 China is capable of winning the battle against the novel coronavirus pneumonia outbreak, which cannot undermine the foundation of China's long-term development, President Xi Jinping said on Thursday.

Xi made the remark in telephone conversations with Imran Khan, prime minister of Pakistan, and Moon Jae-in, president of the Republic of Korea.

In the phone call with Khan, Xi said that the top priority of the Chinese government is to fight the disease, and the situation has developed in a positive direction thanks to the great efforts made by medical workers and people across the nation.

China is confident of winning the battle against the disease, and it will minimize the epidemic's impact to achieve the country's economic and social development goals this year, Xi said.

China will not only focus on the current battle against the outbreak but also summarize experiences to improve the nation's system for the prevention and control of epidemics and the system for national public health emergency management, Xi said.

Noting that China and Pakistan have an all-weather strategic cooperative partnership, Xi said that Pakistan expressed support for China at the very beginning of the outbreak and has offered vital donations to help China fight it.

The Pakistani prime minister's call demonstrated that China and Pakistan are true friends that share both happiness and sadness, Xi said.

Xi said China will continue to work with Pakistan on the building of the China-Pakistan Economic Corridor and toward continuing their mutual support on major global and regional issues.

Khan expressed sincere sympathy for the Chinese people's suffering as a result of the outbreak and spoke highly of the effective measures taken by China.

China's measures have effectively prevented the global spread of the virus, so the whole world should thank China and appreciate the country's efforts, Khan said, adding that no other country could do better than China.

Khan expressed gratitude for China's help and care for Pakistani people living in China, saying that all people in Pakistan will stand together with the Chinese people no matter what happens.

In his conversation with Moon, Xi said that the ROK president's phone call shows the friendship between the two neighboring countries.

Since the start of the outbreak, China has taken the strictest prevention and control measures, Xi said, adding that positive signs have developed thanks to these efforts.

The disease will not affect the solid foundation of China's long-term stability and development, and China will strive to achieve the country's development goals, Xi said.

Xi pointed out that China's strong measures have not only protected the safety and health of the Chinese people but also contributed to global health endeavors.

Xi expressed gratitude for the help and support from the government and people of the ROK, saying that China will continue to enhance cooperation with all countries including the ROK in an open and transparent manner to fight the disease.

The outbreak's influence on China-ROK people-to-people exchanges is temporary, and the friendship between the two peoples will be strengthened after victory is achieved in the battle against the disease, Xi said.

Moon expressed sincere sympathy for the Chinese people's suffering due to the outbreak, and he spoke highly of the great efforts made by China to fight it.

Under Xi's leadership, the Chinese people will definitely win this battle, he said.

The two countries are close neighbors and China's difficulties are also those of the ROK, said Moon, adding that his country will continue to offer assistance to China and take this opportunity to enhance health cooperation with China.