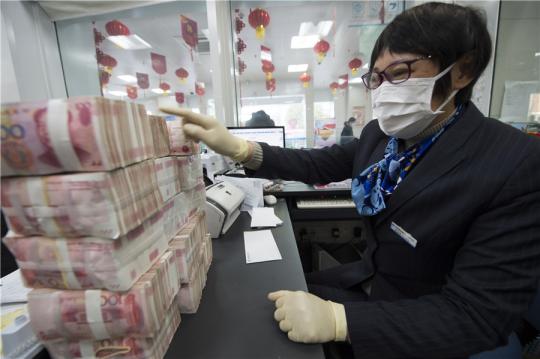 China cut its benchmark lending rate on Thursday to spur production and mitigate impact of the novel coronavirus outbreak on some fragile sectors, even as experts suggested that stronger and cheaper credit supply will help reverse an economic slowdown.

The People's Bank of China, the central bank, cut the benchmark lending rate, the one-year loan prime rate (LPR), by 0.1 percentage point to 4.05 percent. The rate cut was the largest since the LPR was introduced in August 2019, marking a measure to lower financing costs for enterprises amid the virus battle. LPR is the interest that banks charge their most creditworthy clients. The cut in the one-year LPR was in line with market expectations. The five-year LPR, which is a reference point for the nation's mortgage loans, was reduced to 4.75 percent from 4.8 percent.

The nation's new yuan loans in January hit a high of 3.34 trillion yuan ($476.3 billion), double the amount in December (1.14 trillion yuan). The growth of aggregate financing, a broader calculation of the funds provided to the real economy including local government bonds, surged to 5.07 trillion yuan last month, compared with 2.1 trillion yuan in December, which was also an unprecedented high, the PBOC said.

Credit offtake rose sharply due to the higher outlays for production resumption and for mitigating the negative impact of the virus outbreak, said economists.

"The increase in new loans and aggregate financing was not expected," said Wen Bin, chief researcher with China Minsheng Banking."Since February, the central bank has enhanced countercyclical adjustments and maintained reasonably ample liquidity in the financial markets, which was necessary and in time."

China will continue to strengthen monetary and credit support to promote economic growth while maintaining stable prices, the PBOC said in its quarterly monetary policy report issued on Wednesday, saying "preventing and curbing the novel coronavirus epidemic is the most significant task".

The impact of the epidemic would be short-lived and "limited in terms of duration and scope". The Chinese economy is capable of maintaining its growth momentum in the long term, although with some challenges, the central bank said.

"At the present stage, the monetary policy has shifted to the intermediate target of keeping the broad money supply (M2) and aggregate financing growth generally in line with the growth of the real GDP. It should follow a balanced approach in promoting the objectives of supporting economic growth and stabilizing prices," the report said.

Earlier, Kristalina Georgieva, managing director of the International Monetary Fund, urged the G20 finance ministers and central bank governors to "find a solid footing for the global economy" when they gather in Riyadh, Saudi Arabia, because "uncertainty is becoming the new normal" with the coronavirus being the most pressing issue.

"If the disruptions from the virus end quickly, we expect the Chinese economy to bounce back soon," she said. "Spillovers to other countries would remain relatively minor and short-lived, mostly through temporary supply chain disruptions, tourism, and travel restrictions."

Monetary easing, which was popular among the world's major central banks to spur the economy, added approximately 0.5 percentage point to global growth last year, and 49 central banks cut rates 71 times since the 2008-09 global financial crisis. But more measures are needed to reduce uncertainty and put the global economy on a more solid footing, according to the IMF leader.