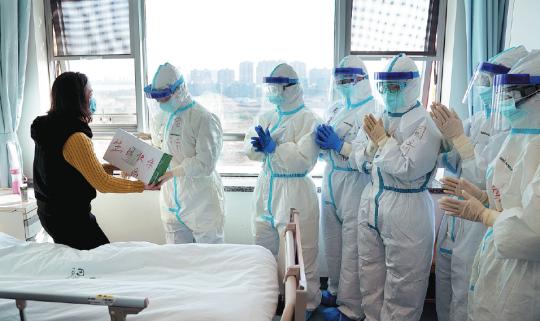 Medical workers present a birthday gift to a patient who recovered from novel coronavirus pneumonia at Tongji Hospital in Wuhan, Hubei province, on Tuesday. The patient was later discharged from the hospital. (WANG YUGUO / XINHUA)

China reported milestone progress in controlling the novel coronavirus epidemic on Wednesday, with a steady decline in new cases and increased recovery rates. At the same time, Wuhan in Hubei province, where the epidemic remains a serious problem, is on track to wrap up a three-day screening campaign.

The number of newly discharged patients on the Chinese mainland exceeded new infections for the first time on Tuesday, according to the National Health Commission, which registered 1,824 patients discharged from hospitals and 1,749 new confirmed cases throughout the day.

Eight provincial-level regions, including the economic hub Shanghai, as well as Liaoning province in the northeast and Hainan province in the south, reported no new infections on Tuesday.

According to commission spokesman Mi Feng, outside Hubei, the outbreak's epicenter, the number of confirmed cases has dropped for 15 consecutive days and the daily death toll has stayed relatively low.

"In Hubei, new infections have been dropping since Feb 13, and the accumulated confirmed cases are leveling off, signifying that the epidemic in the region is under better control and recovery rates are on the rise," he said at a news conference on Wednesday.

The mainland death toll rose by 136 on Tuesday to 2,004. The cumulative number of infections stood at 74,185, and a total of 14,376 patients had been discharged from hospitals by Tuesday, according to the commission.

While the overall epidemic appears to be trending in a positive direction, Wang Zhonglin, Party secretary of Wuhan, where the pathogen first emerged in December, said, "The situation of epidemic control and prevention is still grim, and we must stay sober and avoid becoming blindly optimistic."

On Tuesday alone, Wuhan added 1,660 new confirmed cases — nearly 95 percent of the national total. Meanwhile, 9,562 patients in the city are in severe condition, representing close to 80 percent of the 11,977 seriously ill patients nationwide, according to the commission.

The local government launched a three-day operation on Monday of door-to-door checks across all communities to identify infected people, suspected cases and those who have had close contact with the infected. The campaign is scheduled to close by the end of Wednesday.

Wang said in a video conference on Tuesday that determining the backlog of unknown cases is a step of paramount importance to fighting the disease.

Each district should promise that no suspected or confirmed cases will be left unattended at home when the campaign is completed, he said.

"The screening must be taken seriously as people's lives are at stake," he said. "If there is any case that slips through the net, heads of the district will be held accountable."

Wang urged stepping up nucleic acid testing and ensuring that all confirmed and suspected patients, close contacts and people with fever are tested before Thursday and promptly transferred to appropriate facilities.

During the meeting, he also raised the issue of delays in transferring diagnosed patients at centralized isolation sites to designated hospitals or temporary treatment centers. Their condition could worsen due to a lack of standard treatment.

Twelve temporary hospitals converted from gymnasiums, exhibition centers and sports centers in the city are now fully operational, and a handful of such facilities, including those in colleges and schools, have begun receiving patients. They will operate at full capacity when they have sufficient medical supplies and staff.

In the latest official diagnosis and treatment guideline released on Wednesday, the National Health Commission confirmed that aerosol transmission of the novel coronavirus — droplets carrying the virus that mix with the air and are inhaled — is possible if one is exposed to a highly concentrated mixture in an enclosed area for an extended period.

The guideline also added the anti-malarial drug chloroquine and the anti-viral drug Arbidol to the list of therapies considered effective in inhibiting the growth of the virus. Infusions of blood plasma from recovered patients are recommended for patients displaying serious or critical symptoms, according to the guideline.

The document also cautioned that patients should monitor health conditions and continue to quarantine themselves for 14 days.

At two and four weeks after being discharged, they are supposed to revisit the hospital and undergo a checkup, it said.