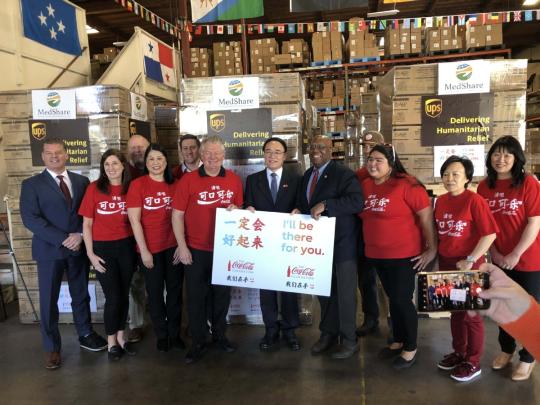 When Curt Ferguson, Coca-Cola's president of Greater China and Korea, left Shanghai for the U.S. about 10 days ago, he gave his last two face masks to his driver at the airport.

Face masks have become a precious gift in China since the outbreak of the novel coronavirus pneumonia. Ferguson has realized that, and he hopes he can help send more masks and other protective gear to Chinese people.

In a warehouse in San Leandro, California, 1.8 million surgical masks and 80,000 disposable isolation gowns, worth $780,000, are ready to be shipped to China, thanks to MedShare, an Atlanta, Georgia-based humanitarian aid organization with support of Coca-Cola and UPS.

Fugerson helped organize a donation event in the warehouse on Monday, where executives of MedShare and UPS as well as volunteers and community members came together to show solidarity with Chinese people.

Signs of "Everything will be OK" and "I'll be there for you" in Chinese and English language were attached on the boxes of the supplies.

"I think the (Chinese) government's fighting it and everybody's resolved to fight this thing," Ferguson told China Daily. "I think the social media helps a lot in China, because people know enough to protect themselves and isolate themselves. If nobody goes out now without a mask and taking precautions, I think that's going to help immensely."

Having lived in Shanghai for four years, Ferguson said it's "amazing that the supply chain has held up really well, with everybody still delivering".

But the "one critical need" right now is face masks and protective equipment, he said.

Despite factories in China working around the clock to meet the growing demand for medical masks, the country is still in dire need of masks. The World Health Organization even warned of a global "chronic shortage" of personal protective equipment.

"One of the things we learn is that you can't wait. You have to have these products ready and all the time," Charles Redding, MedShare's CEO and president, told China Daily.

This year, the organization has launched what they call the "infectious disease control and prevention" program and disaster relief program to reach out to partners ahead of time to get product before an outbreak.

"So the product we're shipping now, we had six months ago. That's the reason we were able to get it before everyone else. We didn't know that there would be a coronavirus outbreak, but we knew that we had had Ebola, we had had SARS. And it's always a question of not 'if' but 'when'," said Redding. "Unfortunately, I would say this time we were right."

This latest relief effort of MedShare is made possible with a $500,000 grant from the Coca-Cola Foundation and free air and ground transportation by UPS.

The shipment of supplies is expected to arrive Friday in Shanghai, where they will be delivered to both Shanghai and Hubei province.

MedShare is working with the Shanghai Soong Ching Ling Foundation and Shanghai Charity Foundation to distribute the supplies in Shanghai. The largest portion of the supplies will be provided to the Shanghai Public Health Clinical Center and Children's Hospital of Fudan University, as well as other hospitals designated for the novel coronavirus treatment.

The supplies for Hubei province will be distributed through the organization's partners at Project Hope, an international health care organization in Maryland.

Earlier this month, MedShare had shipped 800,000 masks to Hubei. So far, it has supplied a total of 2.6 million masks to China, with a total value of more than $1.2 million, according to the organization.

"We recognize that the Chinese people are doing all they can to help fight this disease, but we also recognize that they can't do it alone," said Redding. "It's got to take a lot of great people coming together to help with this issue."

Ferguson said it's encouraging to see that China's medical systems seem to be good and no massive outbreak happening in the two metropolises of Beijing and Shanghai.

"The recovery rate is now soaring. We feel confident enough to have our factories running again," he said. Coca-Cola's factories started operation in North China one week ago.

"We want to get our pipeline going again. The only thing I see in the in the future is - everybody comes back from Chinese New Year and take it easy, and then we'll be back," he said.

In contrast to U.S. Commerce Secretary Wilbur Ross' remarks that the novel coronavirus outbreak in China could lead businesses to bring jobs back to the U.S., Ferguson said his experience proved the opposite.

When he was in China, Ferguson often stayed up all night, conversing with American people because of the time change. "Everybody's saying: how can we help? What can we do? How do we get this (aid) here?" said Ferguson.

"In fact, if anything to Coca-Cola companies, that's how do we invest more in China," he said. "Nobody's pulling out (of China)."