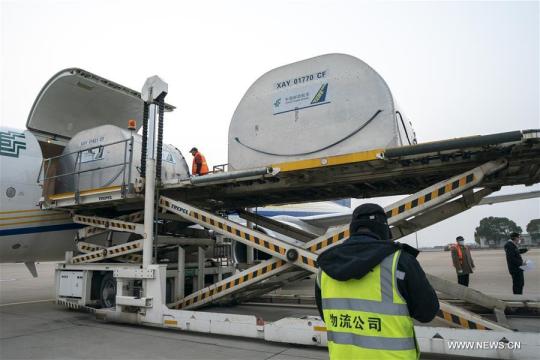 For John Chan, there were no banquets and parties as he spent Chinese New Year's Eve on long-distance phone calls with a public health official in China.

Like many Chinese immigrants in the U.S., Chan, president of the American Chinese Commerce Association in New York, has been closely watching the development of the novel coronavirus in China and wanting to contribute to the relief efforts.

"I felt deeply sad and worried when I saw the news of the virus spreading in Wuhan. It reminded me of the SARS (severe acute respiratory syndrome) in 2003," said Chan.

In a Jan 23 meeting, the day before the Chinese New Year's Eve, Chan's association decided to donate medical face masks to hospitals in Wuhan, the most severely stricken area and the origin of the outbreak.

"Luckily, a member of our association is an importer of medical supplies, so we were able to secure 1 million masks by the New Year's Eve," said Chan. The funding was raised by the association.

Chan was later connected with the Federation of Returned Overseas Chinese in Hubei province, which told him that the medical aid could be sent to Hubei Charity General Association.

On Wednesday morning, Chan got confirmation from China Southern and Xiamen Airlines that the 1,000 cases of masks, weighing 5 tons, will be loaded to two passenger flights and arrive in Guangzhou and Fuzhou, from where the masks will be transported to Wuhan.

"As far as I know, all Chinese communities on the East Coast have been organizing donations. But I think money can't save a life directly; what the hospitals need the most is medical supplies, so we will continue leveraging our resources to purchase the most needed supplies, like medical gloves and goggles," said Chan.

He said he has already ordered 1 million pairs of medical gloves for Wuhan.

According to an article by the Wuhan University Alumni Association of Greater New York, the organization has raised more than $804,000 to assist the relief efforts in China. But only $124,980 had been spent by Monday night because of the scarce resources.

"The American manufacturers need time to manufacture the supplies and restock, and we have experienced delayed orders," the association said in the article. "We are trying to expand our sources according to the needs of the frontline hospitals in China."

The association is soliciting partnership with medical suppliers, manufacturers and hospitals. It also provides transportation channels for those individuals who have amassed medical aid but have no resources for delivery.

Over the weekend, a group of 12 Chinese American students, organized by Hanlin Education Foundation of America, a non-profit organization based in Fremont, California, held a fundraiser to help purchase face masks and protective coveralls for a hospital in Wuhan.

With the help of two other organizations — BRI Foundation and U.S. Hunan Association — the students raised more than $24,000 in three days, said Betty Yuan, chair of Hanlin Education Foundation.

All the students are past participants of a "root-seeking" summer camp program organized by the All-China Federation of Returned Overseas Chinese. During the tours, the students visited several provinces, including Hubei, whose capital city is Wuhan.

"They are very worried about the people in Wuhan, especially children, so our donation will be distributed to Wuhan Children's Hospital," said Yuan.

She said protective coveralls are most highly sought after in the U.S.. Several of their orders have been abruptly canceled by the manufacturers because they have to ensure the supply for domestic hospitals.

"We understand that. So we are exploring other sources, like Japan, Russia and Europe," said Yuan. "I'm proud to say that we have a little bit more experience than others since we used to assist in similar relief efforts for SARS and the Wenchuan earthquake."

As more cases are being reported across China, Yuan said the foundation has been in close contact with a few third- and fourth-tier cities in Liaoning, Anhui, Yunnan and Hunan provinces.

"These places also need our help. Our next step is to raise funding for them," she said.