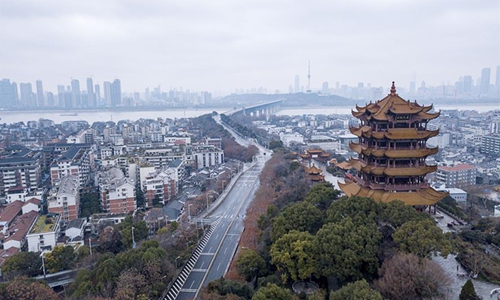 Aerial photo taken on Jan. 26, 2020 shows the Yellow Crane Pavilion and the Yangtze River Bridge in Wuhan, central China's Hubei Province. Many residents here have reduced or avoided outdoor activities during the Spring Festival holiday in Wuhan, the hardest-hit city of the novel coronavirus outbreak in central China. (Xinhua/Xiong Qi)

Tuesday brought a gleam of hope for China as at least 10 provinces, including Central China's Hubei Province, the epicenter of the coronavirus outbreak, reported a decline in the number of newly infected patients than the previous day.

Update as of 8:00 am on Wednesday, the National Health Commission reported 5,974 confirmed cases in 31 provinces (including autonomous regions and municipalities), with 1,239 in serious condition and 132 deaths. A total of 103 patients recovered and as a result, discharged from the hospital. So far, there are 9,239 suspected cases.

On January 28, 840 new cases of pneumonia were reported in Hubei province. On the 27th, however, there were 1,291 newly reported cases.