Claims 'made up' in Western media sources 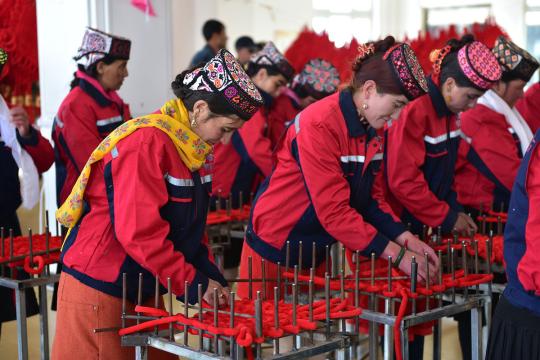 The comments of a few United States and Western politicians about "suppressing Uygurs and persecuting Muslims in the Xinjiang Uygur autonomous region" conflict with the facts. Their goal is to provoke ethnic discord and antagonism between China and Muslim countries, representatives of the regional government said.

"We have noticed that some Western media made up claims like 'the Chinese government restricted Uygurs' communication and freedom of movement'. In addition, some people, incited by the East Turkestan Islamic Movement, have posted online that their relatives in China were 'missing'. I want to emphasize here that neither the personal freedom of any ethnic groups in Xinjiang nor their communications with their overseas relatives has ever been restricted," Gul Ablim, spokeswoman for the Xinjiang government, said on Friday in a news conference in Urumqi, the regional capital.

ABC News in Australia once reported that Azmet Umal, a Chinese citizen living in Australia, said his family members in Xinjiang－including his father, stepmother, three brothers, two sisters and over 20 nephews－were missing. "It has been verified that all his family members in China are living a normal life and enjoy personal freedom. There have been many such reports," Gul said.

Even some members of the East Turkestan Islamic Movement, a terrorist organization that aims to separate Xinjiang via violence, have started to worry that too many of their lies will be exposed sooner or later, she said.

On Dec 31, a mainstream French media source, France 24 TV Station, reported that Alfred Erkin, a member of the East Turkestan Islamic Movement who lives in the U.S., spoke out against using misinformation as a basis for criticism of the Chinese government.

In addition to such misinformation, some American politicians and media sources claim that Xinjiang's efforts to upgrade social governance with modern technologies is a way to monitor and control Uygurs or Muslims.

"Using modern technology and big data analysis methods to promote social governance has already become a common practice around the world," Gul said. "Xinjiang installed surveillance cameras in public places like main roads, traffic intersections and in urban and rural areas in compliance with law. These cameras themselves are not directed against any specific ethnic group, nor will they identify a specific one."

As pointed out by Canadian independent journalist Steven Gowans in his article questioning the position of New York Times: "It called Beijing's efforts in tackling separatist-oriented violence inspired by religious extremism 'repression of Muslims'". The New York Times never refers to the U.S. "war on terror" as "suppression of Muslims". When it comes to the U.S. strategic rival (China), the newspaper switches its criteria. It magnifies efforts targeting a small number of 'religious extremism' inspired violent terrorists as suppressing all Muslims, he said.

The region, which has seen frequent terrorist attacks in the past, will continue to strike hard against terrorist and religious extremist activities in accordance with the law, Bahargul Smat, head of the Xinjiang Uygur Regional People's High Court, said while delivering the court's work report at the annual session of the Xinjiang Uygur Regional People's Congress on Wednesday.