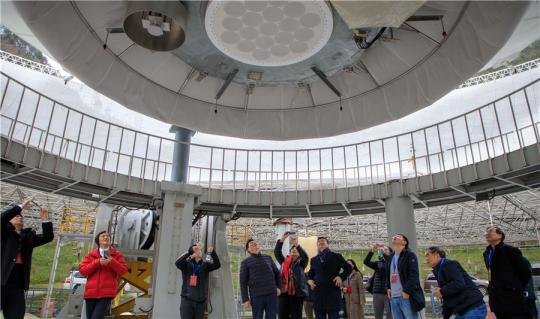 The telescope's superior sensitivity is expected to lead scientists to great scientific breakthroughs in research on astronomical phenomena including pulsars, hydrogen in the Milky Way and neighboring galaxies, and fast radio bursts.

It will also serve some researchers working at the frontiers of cosmic studies, including detecting the magnetic fields of exoplanets, which may harbor extraterrestrial life, and gravitational waves-"ripples" in space caused by some of the most violent and energetic processes in the universe－that were only directly observed for the first time in 2016 by an observatory in the United States.

"We hope it will help systematically expand our vision of the universe and discover a completely new unknown world," said Yan Jun, director of the National Astronomical Observatories, the Chinese Academy of Sciences subsidiary that operates FAST.

The idea of building the world's largest single-dish radio telescope was first put forward in the 1990s by a group of astronomers including Nan Rendong, FAST's previous chief scientist, who died in 2017.

Located in the remote Dawodang depression in Guizhou province, the project was approved by the central government in 2007. Construction kicked off in 2011 and finished in 2016, with an investment of about 1.15 billion yuan ($166 million).

After overcoming a number of construction difficulties due to the super-large scale and ultrahigh sensitivity of the telescope, the facility entered testing in 2016 and passed a series of technical and performance assessments last year.

Li Di, FAST's chief scientist, said the facility was opened for domestic research last year and has since received 140 applications from 21 academic institutes and universities. Many projects selected have been generating new scientific results. 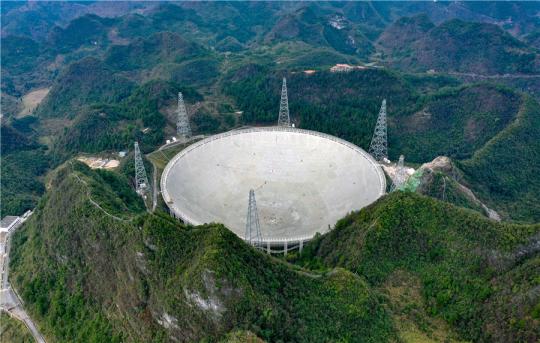 A bird's-eye view of the telescope. (Photo/Xinhua)

Now that it has passed evaluation, Li said it will begin a systematic survey of the universe this year.

"FAST has unique advantages in its observation capabilities. It can map out the most important baryonic matter in the universe, namely atomic hydrogen, which is much more massive than all the visible stars and galaxies combined," he said.

One of the focuses will be the Milky Way and M31, the nearest spiral galaxy to it. The scientific results will help scientists explain the formation of galaxies, the composition of the gases, and the processes and mechanisms of the origin of stars and planets such as the sun and Earth.

Although FAST already excels in discovering pulsars with its speed and efficiency, Li said that is just the beginning of a more systematic study of pulsars－dead neutron stars that emit beams of electromagnetic radiation.

At the evaluation meeting on Saturday, the State assessment committee said the FAST project had achieved a number of innovations, significantly improved China's research ability in radio astronomy, promoted innovation of related technologies and produced large social and economic benefits.

"The comprehensive performance of FAST has reached a top level internationally, which is of great significance in promoting major astronomical breakthroughs in China," the committee said.