Beijing air much cleaner in 2019 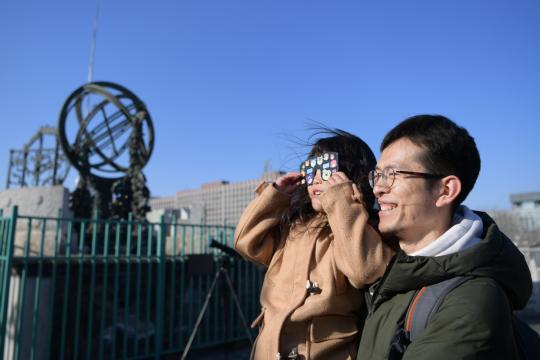 A father and his daughter watch the partial solar eclipse at the Beijing Ancient Observatory in Beijing under a blue sky on Dec 26, 2019. (chinadaily.com.cn/Wei Xiaohao)

The air quality in Beijing continually improved during the past year with the density of major pollutants cut down significantly, the capital's environment organ said on Friday.

In 2019, the average concentration of PM 2.5 in Beijing was lowered to 42 micrograms per cubic meter, falling by 17.6 percent year-on-year and down by 53 percent from 2013, according to the Beijing Municipal Ecology and Environment Bureau.

The PM 2.5, hazardous fine particulate matter with a diameter of 2.5 micrometers or less, is still the major air pollutant in the city, exceeding the national standard of 35 micrograms per cubic meter by 20 percent, said the bureau during a news conference on Friday.

A total of 240 days boasted good air quality in the past year, accounting for 65.8 percent of the whole year, 64 days more than the good days in 2013, the bureau said.

Besides, only four days throughout 2019 saw heavy air pollution with PM 2.5 being the primary pollutant, down from 58 days in 2013.