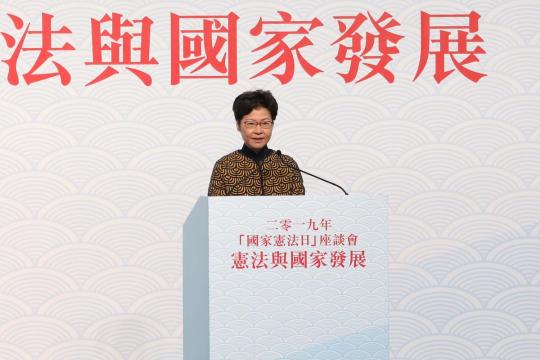 Top officials in Hong Kong stressed on Wednesday the importance of pushing ahead with understanding of the nation's Constitution and strengthening Hong Kong people's awareness of national identity.

Political heavyweights from central and local governments made the remarks at the city's third National Constitution Day forum, an annual special day adopted to enhance social awareness of the Constitution.

Hong Kong Special Administrative Region Chief Executive Carrie Lam Cheng Yuet-ngor addressed the forum, saying she would lead the SAR government to continue to step up education on the Constitution and strengthen national identity awareness among teenagers and civil servants in the hope that the city can play its unique role in China's future development.

Through various educational activities about the Constitution and the Basic Law, Lam said she hoped the whole of Hong Kong society would get a clear understanding that there is no "two systems" without "one country".

Lam's comments follow protests that shook the city's rule of law in June after a non-withdrawn extradition bill was introduced.

Wang Zhimin, director of the Liaison Office of the Central People's Government in the HKSAR, expected young people in Hong Kong to study the Constitution and Basic Law and contribute to the city's implementation of the "one country, two systems" principle.

Wang told the forum that the national Constitution has supreme legal authority across the country, including the SAR. Maintaining the Constitution's dignity and authority is fundamental to ensuring the central government's overall jurisdiction and the SAR's high degree of autonomy, he said.