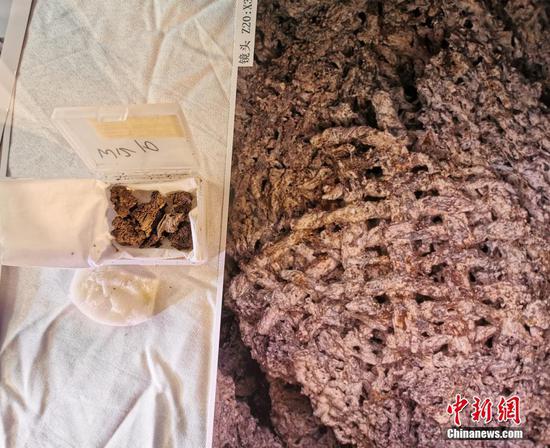 Silk remains found in an ancient tomb in Central China pushed the origin of the country's technique of feeding silkworms and weaving silk back to 5,500 years.

The remains from a relic site in Xingyang, Henan Province is the oldest silk found in the country, about 1,500 years older than the last discovery in East China's Zhejiang Province. The technique used to weave the silk is very mature, said Gu Wanfa, head of Zhengzhou Institute of Cultural Heritage and Archaeology, at a press conference on Tuesday.

After reconstructing the carbonized silk remains, archaeologists found one piece that was woven with a sophisticated technique. The textile was degummed and dyed, news outlet thepaper.cn reported.

Bone carvings in silkworm shape have been found in other relics in Central China, demonstrating that ancient Chinese were familiar with the creature and able to domesticate it to produce silk, Gu said.

The silk remains were found in a jar-shaped coffin of a child, prompting scholars to believe silk in ancient times was not for daily use but a sacred object of ancient worship. The transformation of silkworms into moths convinced ancient Chinese of its capability for rebirth, thepaper.cn reported.

Technological progress makes reconstructing carbonized textiles much easier and cheaper. Archaeologists are trying to map out the domestication and production of silk by ancient people in Central China, China News Service reported.